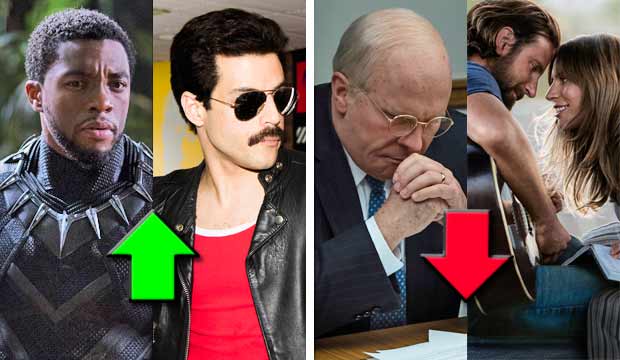 Where does the Oscar race stand now that the Screen Actors Guild Award winners have been announced? The SAG Awards are usually a reliable barometer when it comes to sizing up the Oscar acting races, but these awards don’t usually tell us as much about which way the Best Picture race will go. The last two films to win for their ensemble casts (“Hidden Figures” and “Three Billboards Outside Ebbing, Missouri”) ended up losing the top Oscar. In fact, only 11 out of 23 ensemble winners has corresponded to the Best Picture winner at the Oscars.

Then again, the SAG Awards are sometimes our first signal of a huge Oscar upset in the making, as they were when they picked the casts of “Shakespeare in Love” (1998), “Crash” (2005) and “Spotlight” (2015) before their big Oscar shockers. So let’s consider who’s up and who’s down in the Oscar race now that SAG has had their say.

“Black Panther” — It was the night’s most awarded film with two trophies: one for its main cast and one for its stunt ensemble. That’s pretty good for a billion-dollar Marvel movie. This means it has strong support from the industry’s actors, and actors make up the largest branch of the motion picture academy. That said, “Panther” still has a steep hill to climb at the Oscars since the academy snubbed it entirely in acting, writing, directing and film editing categories. So there’s still no easy path to victory for the blockbuster.

“Bohemian Rhapsody” — Though the film didn’t win for its ensemble cast, the Freddie Mercury biopic did win for Rami Malek‘s lead performance in what seemed like a close race against Christian Bale (“Vice”) — more on that below. I’m not so sure this win makes “Rhapsody” a contender to win Best Picture all of a sudden, but at the very least it makes Malek the man to beat for Best Actor.

“A Star is Born” — It was the most nominated film at these awards with four nominations, which made it the biggest shutout of the night when it left the ceremony without any hardware. It’s the latest tough blow against the musical drama, which seemed like the Oscar front-runner last fall but has since underperformed at the Golden Globes and Critics’ Choice Awards and lost at the Producers Guild and now Screen Actors Guild Awards. Can it still recover any of its lost momentum?

“Vice” — It was surprising that a starry ensemble movie like “Vice” wasn’t nominated at the SAG Awards for its ensemble cast, but we thought it still had a good chance of winning its two individual acting nominations for Bale and Amy Adams. The path seemed especially clear for Adams since SAG snubbed Oscar front-runner Regina King (“If Beale Street Could Talk”). But the guild threw a wild curveball there, awarding Emily Blunt (“A Quiet Place”) even though she didn’t make the cut at the Oscars. Maybe this divisive film isn’t as strong as it looked on Oscar nominations morning.

“BlacKkKlansman” — An upset win for its ensemble cast would have been a huge boon for this Spike Lee joint, but even though it lost all three of its nominations, the fact that it contended for its cast still leaves it in a good position to overtake “Roma” at the Oscars. “Klansman” is the one film that hasn’t missed any precursor awards or Oscar categories that you usually need to win Best Picture. It’s still a threat.

“Green Book” — It had two acting nominations, but unlike “Vice” it cashed in with an expected victory for Mahershala Ali‘s supporting performance. That may not indicate much for the film’s Best Picture chances so much as it reinforces Ali as the Best Supporting Actor front-runner, but the film overall is nevertheless holding steady.