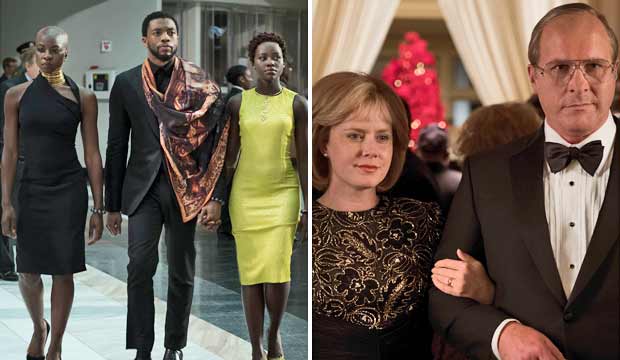 There are only six categories to be handed out for film at the 2019 Screen Actors Guild Awards on Sunday night, January 27, but the more than 100,000 members of the SAG-AFTRA industry union are expected to spread the wealth to four different films, according to the combined predictions of thousands of Gold Derby users. “Black Panther” and “Vice” are favored to come away with the most hardware with two wins apiece … unless “A Star is Born” stages an ambush.

“Black Panther” is the heavy favorite to win for its stunt ensemble. It’s also the front-runner to win for its main ensemble cast by the narrowest of margins — so narrow, in fact, that “A Star is Born” has exactly the same racetrack odds of 37/10 as of this writing. “Star” is the most nominated film at these awards with four bids, but “Panther” has the biggest cast in contention, which is often an advantage at these awards. Consider the massive casts that have won in years past, including “Traffic” (2000), “Gosford Park” (2001), “Inglourious Basterds” (2009) and “The Help” (2011). When awarding their favorite casts the SAG Awards often like to get the most bang for their buck.

“Vice” is also expected to claim two awards. It wasn’t nominated for its ensemble cast like we thought it would be, but it’s out front for both of the individual prizes it’s nominated for: Christian Bale for his leading role as Vice President Dick Cheney and Amy Adams for her supporting performance as Dick’s wife Lynne Cheney. This would be the first individual win for Adams and the second for Bale, but they actually won together once before as members of the ensemble cast of “American Hustle” (2013).

The last two awards are forecast to go to Glenn Close for her leading performance in “The Wife” (but watch out for that “Star” turn by Lady Gaga), while Mahershala Ali will prevail for the third time in three years for his supporting role in “Green Book.” Close previously won in 2005 for her role in the TV movie “The Lion in Winter,” while Ali won two years ago for his individual performance in “Moonlight” and his ensemble performance in “Hidden Figures.”

Do you agree with our forecasts? Check out our predictions by film below, and make or update your own predictions right here before winners are revealed.

“THE WIFE”
Female Actor in a Leading Role — Glenn Close

Be sure to make your SAG predictions so that Hollywood insiders can see how their films and performers are faring in our odds. And join in the fierce debate over the 2019 SAG Awards taking place right now with Hollywood insiders in our movie forums. Read more Gold Derby entertainment news.