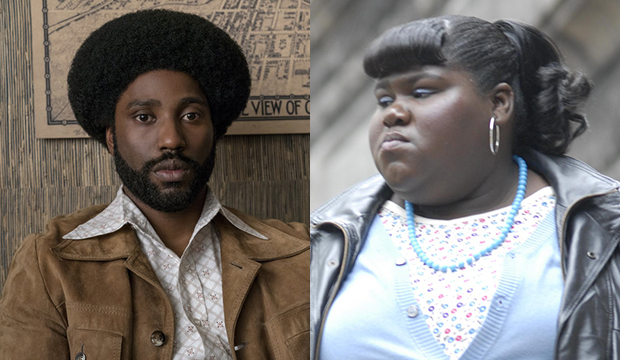 The Writers Guild of America Awards on Sunday was full of surprises, not the least of which was “Can You Ever Forgive Me?” winning Best Adapted Screenplay over “BlacKkKlansman.” The Oscar frontrunner, “BlacKkKlansman” was the odds-on favorite at WGA as well in what many of us assumed would be an easy win for Spike Lee & Co. en route to his first competitive Oscar. But what does this loss mean for “BlacKkKlansman”‘s Best Adapted Screenplay Oscar chances now? It will have to do what just one film has managed to achieve in the last 10 years: win the Oscar by beating the film to which it lost the WGA Award.

The last film to do this was “Precious” (2009), which claimed Best Adapted Screenplay over season-long frontrunner “Up in the Air.” Just how big of an upset was this? “Up in the Air” had bagged every major precursor: the Golden Globe (remember, the Globes only has a single screenplay category), Critics’ Choice, BAFTA and WGA. But it was also beset by a writing credit dispute between co-writers Jason Reitman and Sheldon Turner that may or may not have impacted its Oscar fate.

Because of the stringent WGA rules, there are plenty of Oscar nominees and winners that never competed at WGA, which sometimes makes for vastly different fields at both award shows. This year, Best Original Screenplay Oscar frontrunner “The Favourite” wasn’t eligible at WGA, which crowned the Oscar-snubbed “Eighth Grade” over Oscar nominees “Green Book,” “Roma” and “Vice.” Two recent Best Picture champs, “12 Years a Slave” (2013) and “Birdman” (2014), were ineligible at WGA, but their scripts nabbed adapted and original screenplay honors, respectively, at the Oscars.

But there were no eligibility issues or category confusion with “Precious” and “Up in the Air” or “BlacKkKlansman” and “Can You Ever Forgive Me?” All four made it into WGA and the Oscars, and they have a bit of a reverse situation going. “Up in the Air” was the favorite that won everything and was upset by the challenger at the Oscars. “Can You Ever Forgive Me?”, currently in third in our Oscar odds, is the challenger that upset the favorite at the WGA and is trying to do the same at the Oscars.

SEE Spike Lee is the sixth black filmmaker to get a Best Director Oscar nomination, but will he be the first to win?

But there are some things that might help “BlacKkKlansman” pull a “Precious.” With six nominations, it’s a stronger film overall than three-time nominee “Can You Ever Forgive Me?”, which is not up for Best Picture. (“Up in the Air” and “Precious” were both Best Picture nominees.) In fact, “A Star Is Born,” which is in fourth place, is the only other Best Picture nominee in the adapted screenplay lineup (“Beale Street” is in second; “The Ballad of Buster Scruggs,” fifth), and that remake has won exactly zero awards for its script.

And then there’s the Spike Lee factor. With Best Director basically locked up for Alfonso Cuaron (“Roma”), Best Adapted Screenplay is the best place to give the overdue Lee, who co-wrote the script with Charlie Wachtel, David Rabinowitz and Kevin Willmott, his first competitive Oscar. That might be enough to help push “BlacKkKlansman” over the line, but it’s clear that the film is not as strong in this race as we all thought it was.

Be sure to check out how our experts rank this year’s Oscar contenders. Then take a look at the most up-to-date combined odds before you make your own 2019 Oscar predictions. Don’t be afraid to jump in now since you can keep changing your predictions until just before winners are announced on Feb. 24.