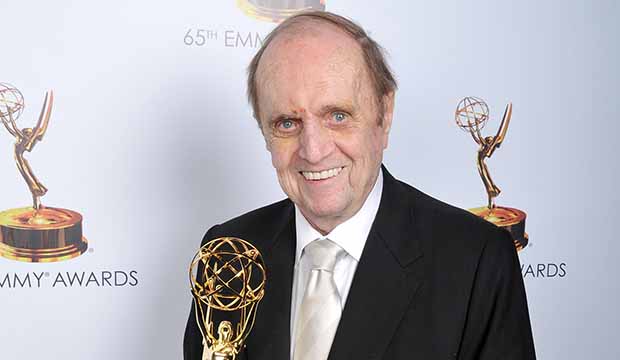 Bob Newhart has been selected by Gold Derby editors to receive a special Career Achievement Award at our Emmy season kickoff party on June 5 in Hollywood.

Newhart is not only an Emmy Award winner (Best Comedy Guest Actor for “The Big Bang Theory,” 2013) and frequent nominee, but the Emmys once played a lucky, key role in launching his early TV success.

Back in 1960, Newhart was known chiefly as the first performer ever to reach number 1 on the Billboard sales charts with a hit comedy album – “The Button-Down Mind of Bob Newhart.” He was not yet a TV star, but he was invited to perform a solo skit at the next Emmys telecast. At the last minute, Newhart was suddenly given lots of extra airtime when an “inappropriate” comedy skit planned by Mike Nichols and Elaine May got nixed (it had the nerve to mock an advertiser) and TV producers had to fill the time.

“The show managed to usher in a new comedy star: Bob Newhart,” reported the L.A. Times. The young comedian, “who was unknown six month ago, bumbled through a hilarious discussion of life in the Navy … and a hilarious portrait of a TV director blocking out the Khrushchev arrival in Washington D.C.”

Variety said that Newhart “just about grabbed the laurels and ran.”

Newhart’s star turn boosted sales of his disc “Button-Down Mind” and he went on to win three Grammy Awards a few months later: Album of the Year (beating Frank Sinatra and Nat King Cole), Best New Artist (besting Leontyne Price) and Best Comedic Performance. Two years later Newhart had become such a huge star that he was invited to co-host the Emmys where his short-lived variety program “The Bob Newhart Show” competed for Best Humor Program despite being canceled. Nonetheless, it pulled off a shocking upset over “The Andy Griffith Show,” “Car 54, Where Are You?,” “Hazel,” and “The Red Skelton Show.”

However, Newhart was not a producer of the program so he did not personally collect an Emmy. His first nomination came that same year for Best Comedy Writing, losing out to “The Dick Van Dyke Show.” Later, his long-running 1970s series “The Bob Newhart Show” (same title but a situation comedy set in Chicago) reaped four Emmy bids, but none for Newhart himself.

Newhart was then nominated as Best Comedy Actor for his long-running 1980s program “Newhart” three times. He followed with guest acting noms for “E.R.” (2004) and for “The Big Bang Theory” (2013 winner, 2014, 2016) plus an additional time for the TV movie “The Librarian: The Curse of the Judas Chalice” (2009). That brings his career total to nine Emmy nominations with one victory (so far).

Only one other person has ever received a Career Achievement Award from Gold Derby: Oscar/ Emmy campaign pioneer Murray Weissman was honored in 2010 when GoldDerby.com was relaunched with sophisticated prediction functionality at a gala celebration in Hollywood.