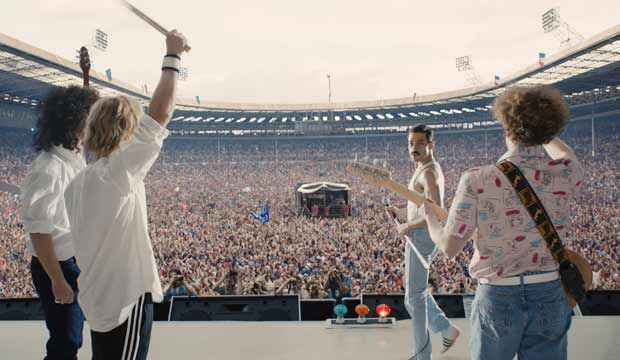 The millions of Queen fans who have seen “Bohemian Rhapsody” probably know by now that Mike Myers, hiding behind a beard and a mop of curly hair is clueless  EMI executive Ray Foster, who did not appreciate the grandly operatic wonder that is the film’s title tune. There is a big hint when he references one of  his greatest hits, 1992’s “Wayne’s World,” as he says, “No one is going to be head-banging in the car to ‘Bohemian Rhapsody.’ “

But there is another, briefer cameo that you might have missed. Did the dude in the trucker hat, fleece-lined jacket and flannel plaid shirt flashing Rami Malek‘s Freddie Mercury a lascivious come-hither look before ducking into a rest-stop bathroom look familiar to you?

SEE Loved by Oscars, not by critics: Can ‘Bohemian Rhapsody’ follow in footsteps of ‘The Reader,’ ‘Iron Lady’ and more?

Behind all that facial scruff is none other than Adam Lambert, the “American Idol” Season 8 runner-up who has been the lead singer for Queen since 2011. Lambert himself made the reveal on Twitter on Friday after teasing last fall at a red carpet event for the film’s New York premiere that he had a brief appearance on-screen that was “very, very mysterious.”  He also touted the arrival of the digital version of “Bohemian Rhapsody” on January 22, which features the entire Live Aid concert recreation that was left out of the theatrical print. The DVD and Blu-ray will be out Feb. 12.

SEE 2019 Oscars: 5 reasons why ‘Bohemian Rhapsody’ will do better than we are predicting

Did you guess the usually glam Lambert was under that gimme cap? Or were those hungry eyes a dead giveaway? Was he intentionally trying to fool his fans? If you want see Adam in the flesh, he will be front and center when he joins Queen for a 23-date North American tour from July 10 to Aug. 23. Check out the dates here.

Who is he!? 😏😂 #BohemianRhapsodyMovie is available for digital download on 1/22! pic.twitter.com/RXVOvhv2qu