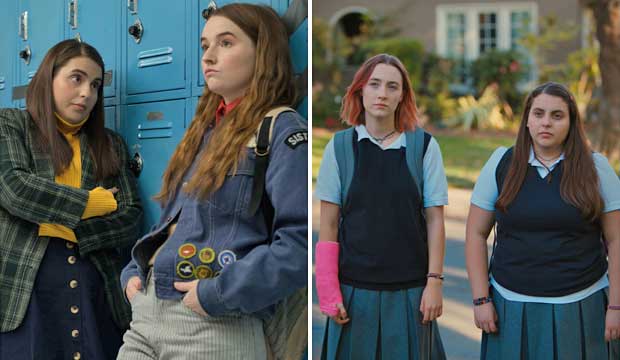 Will “Booksmart” be remembered at the Oscars? It opened in May, and movies released that early often get lost in the shuffle as fall films compete for attention. But it bears a striking resemblance to another film that was recently nominated for Best Picture: “Lady Bird.”

There are the obvious parallels of their stories. Both are coming-of-age comedies about high school seniors preparing for college. “Lady Bird” was about its title character (Saoirse Ronan) exploring romance and navigating her relationship with her mother (Laurie Metcalf) before college. “Booksmart” is about a pair of overachieving best friends (Beanie Feldstein and Kaitlyn Dever) who try to cap their four years of study with one night of partying. Feldstein, not for nothing, also co-starred in “Lady Bird” as Ronan’s best friend.

Teen comedies are seldom Oscar bait, but these indies achieved prestige through their critical acclaim. “Lady Bird” scored a sky-high 94 on MetaCritic, and “Booksmart” was rated an impressive 84.

There’s also one key similarity behind the camera. Both films were helmed by actresses-turned-directors. “Lady Bird” was the solo directing debut for Greta Gerwig, who earned Oscar nominations for both directing and writing the film. And “Booksmart” is the feature directing debut of Olivia Wilde, who was previously known for her work onscreen in “House,” “Rush” and “TRON: Legacy,” among other TV and film roles.

“Booksmart” was also written by women, four of them to be exact: Emily Halpern, Sarah Haskins, Susanna Fogel and Katie Silberman. Like “Lady Bird,” the film arrives at a time of increased public focus on the dearth of women recognized for their work behind the camera. When Gerwig was nominated for Best Director, she was only the fifth woman to make the cut in that category — ever.

So “Booksmart” has a lot of the same qualities going for it that “Lady Bird” had. Probably the most crucial difference between them is timing. “Lady Bird” opened in November of 2017, right in the traditional awards-season window. “Booksmart,” meanwhile, opened back in May, where it battled summer blockbusters for attention (“Aladdin” and “John Wick: Chapter 3” opened on the same Memorial Day weekend). It grossed $24.6 million worldwide — not too bad against a $6 million production budget — but that was about a third of “Lady Bird’s” ultimate box office haul.

But early releases aren’t always out of luck. “Black Panther” (2018) opened in February. So was “Get Out” (2017). “Mad Max: Fury Road” (2016) was a May release, just like “Booksmart.” “The Grand Budapest Hotel” (2014) came out in March. All of them were nominated for Best Picture. Granted, those films had the benefit of greater box office success, but don’t forget that “The Hurt Locker” (2009), a June release, went on to win Best Picture despite being considered a financial disappointment. That film was also directed by a woman: Kathryn Bigelow, the first and only female Best Director winner thus far.

So they key for “Booksmart” will be to refresh voters’ memories as awards season progresses. So those overachievers may have even more parties to get to before they graduate.