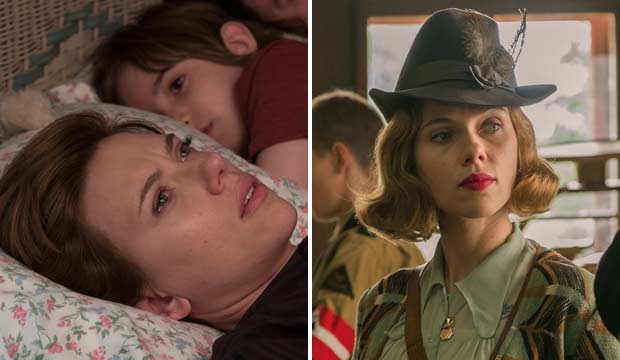 What do Brad Pitt, Scarlett Johansson, Robert De Niro, Antonio Banderas, Julianne Moore, Robert Pattinson, Timothee Chalamet, Ian McKellen and Elisabeth Moss  have in common in this year’s Oscar race? All these actors could pull off a stunt that hasn’t been achieved in 12 years — scoring both a lead and a supporting nomination in the same year.

First, some history. Back when Oscar was just a baby, performers could be nominated multiple times in the same category. That is how George Arliss (“Disraeli” and “The Green Goddess”), Greta Garbo (“Anna Christie” and “Romance”) and Norma Shearer (“The Divorcee” and ‘Their Own Desire”) all received two berths during the 1929/30 race. Garbo would win for “The Divorcee” and Arliss was rewarded for “Disraeli,” but that all changed when the supporting actor and actress categories were added in 1936.

A glitch in the system was exposed, however, when Barry Fitzgerald‘s performance as a stubborn old-school priest in 1944’s “Going My Way” landed in both the lead and supporting categories. As is still the case now, voters could decide on category placement. But somehow, he ended up being named twice for the same role. All ended well when co-star Bing Crosby won as a headliner while Fitzgerald took the supporting trophy. But measures were taken to keep this category confusion from happening again.

It’s been 12 years since a single artist pulled off this double-up trick in one year. But judging from the list of actors and actresses who are stumping for Oscar attention this year on our prediction sites, there is a rather wide pool of contenders who can qualify for both. And don’t forget that Lange, for one, labeled her part in “Tootsie” as supporting so she could also qualify as a lead for “Frances.”

Such a double-duty opportunity is obviously more likely to happen for some than others this year. Here are the performers with the best chance to grab a pair of ballot spots given their standing in Gold Derby’s combined racetrack odds as of September 26:

* Brad Pitt, “Once Upon a Time in Hollywood” and “Ad Astra”: Pitt, whose category status in Quentin Tarantino‘s nostalgic Tinseltown fairy tale is yet to be determined, has been topping the supporting actor category ever since August 5, when the prediction site was put in place. But that doesn’t mean he couldn’t slide into the Best Actor contest for his lonely space traveler in “Ad Astra,” who is at No. 22.

* Scarlett Johansson, “Marriage Story” and “Jojo Rabbit”: Johansson, who has yet to be nominated for an Oscar, plays two different mothers in these film-fest hits. She sits at no. 7 for her supporting role in the Nazi-themed comedy “Jojo” and is at No. 2 for Noah Baumbach‘s highly personal story of a nasty divorce between a bicoastal couple.

* Robert De Niro, “The Irishman” and “Joker”: De Niro is the title hitman in this ninth collaboration with Martin Scorsese and currently is ranked No. 5 among lead actors. And it just so happens that his talk-show host in the “Joker” is an homage to his character from Scorsese’s “The King of Comedy.”  He sits No. 26 among supporting actors.

* Antonio Banderas, “Pain and Glory” and “The Laundromat”: Banderas, who has yet to reach the Oscar zone, is sitting pretty at No. 4 among male leads for his “Pain and Glory” role as an aging director (based on his frequent collaborator Pedro Almodovar) who turns to drugs and drink while reliving moments from his past. Meanwhile, his supporting part in Steven Soderburgh‘s “The Laundromat” casts him a Panamanian lawyer tied to a money-laundering scheme. His rank: No. 40.

* Julianne Moore, “Gloria Bell” and “After the Wedding”: The actress has been in this situation before when she was up for both “Far From Heaven” as a lead and “The Hours” for supporting. In “Gloria Bell,” she is a middle-aged divorcee looking for love. In “After the Wedding,” she is the mother of a bride whose daughter learns a guest is actually her real mother.  Neither nomination is likely, given her low rankings — but you never know.

* Robert Pattinson, “The Lighthouse” and “The King”: The “Twilight” actor’s lead role as a disturbed lighthouse keeper on a remote New England island is at No. 24 among male leads. In “The King,” he is the Dauphin opposite Timothee Chalamet’s King Henry V and sits at No. 28.

* Timothee Chalamet, “The King” and “Little Women.” This popular actor is at No. 25  for his title role in “The King,” which was favorably received at the Venice film festival.  He might have more success, however, with his supporting part as Laurie in “Little Women” as he reunites with his “Lady Bird” director Greta Gerwig and his leading lady Saoirse Ronan as Jo.  Right now, he is at No. 16.

* Ian McKellen, “The Good Liar” and “Cats.” Sir Ian is one of the more esteemed actors living today but he has yet to win an Academy Award.  His lead as a con man who preys on lonely older women — specifically Helen Mirren in this case — finds him within reach among lead actors at No. 12. As for “Cats,” he is Gus the Theatre Cat, an aged thespian who relives the highlights of his career. The poor puss is only ranked at 43rd among the supporting players.

* Elisabeth Moss, “Her Smell” and “Us.” Voters love a change of pace role that stretches a performer beyond what they have done before and Moss’s turn as self-destructive and selfish punk rocker Becky Something definitely does that, which why she is at No. 12 among lead actresses. On top of that challenge, she took on a rare horror role in “Us.” She is placed at No. 24 among supporting females.

Oscars: 10 performers who got lead and supporting nominations in the same year