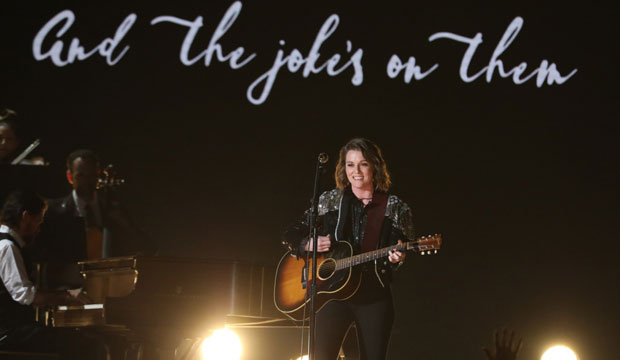 Brandi Carlile lost all three of her nominations that were presented during the Grammys telecast on Sunday night, but the joke’s on them because viewers thought she won the night anyway. We asked our readers who gave their favorite performance, and they said Carlile’s rendition of “The Joke” was the best in show. Scroll down to see our complete poll results.

Out of more than a dozen performances, almost two-thirds of our readers (32%) picked Carlile’s raw performance as their favorite. It was simply staged with just her and her band rocking out as her lyrics scrolled behind her. Her songwriting and her vocals spoke for themselves.

But even though Carlile didn’t win the top categories, she was still one of the year’s biggest winners overall. During the Premiere Ceremony that took place at the Microsoft Theater before the main event at the Staples Center, Carlile swept the American roots field, winning Best Americana Album for “By the Way, I Forgive You” and Best American Roots Performance and Best American Roots Song for “The Joke.” Those were the first three Grammys of her career.

SEEGrammys 2019: Where do Beyonce, Jay-Z and Quincy Jones now stand on the list of all-time biggest winners [PHOTOS]

Lady Gaga also rocked out with an edgier version of her double-Grammy-winning “Shallow” from “A Star is Born,” and she finished second in our poll with 23% of readers who said she was the class of the field. Placing third was the host of the Grammys herself, Alicia Keys, who got 13% of the vote for her dynamite medley of songs by everyone from Roberta Flack to Drake.

Do you agree with our poll results? Check them out below, and you can keep voting here to let us know who you thought really owned the night. 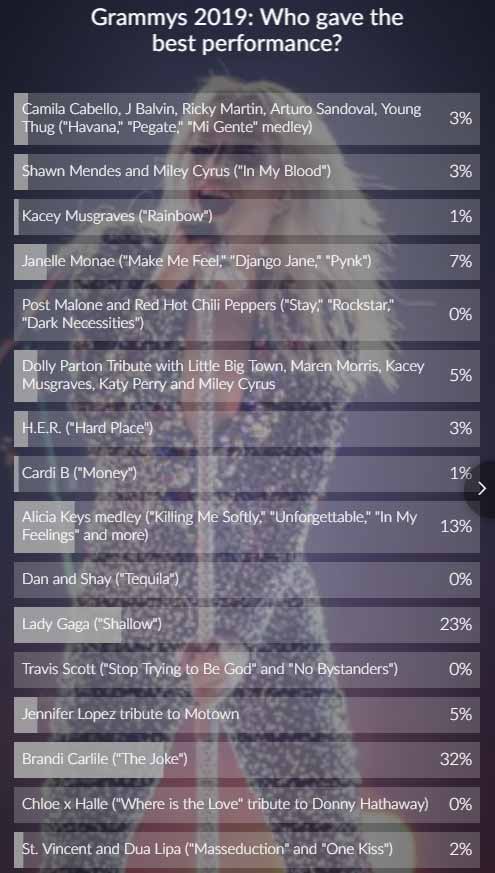