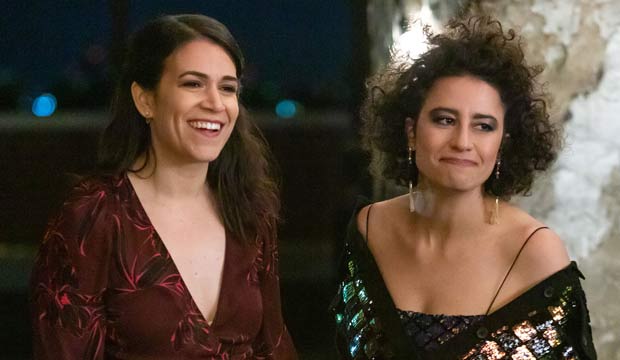 Shortly after college I bought a one-way bus ticket, boarded with two duffel bags and no job, and moved to New York City. The metropolis I soon fell in love with looked nothing like how primetime sitcoms described, but Ilana Glazer and Abbi Jacobson soon brought my New York to TV screens with their hilarious “Broad City.”

Growing up, the New Yorkers I watched from my couch were Debra Messing and Eric McCormack. Looking back, I cannot even fathom what the rent would be for their luxurious apartment on “Will and Grace.” I don’t care if Will is a lawyer, there’s no way he could afford it. And while we’re at it, how on earth did Monica and Rachel pay for that massive West Village two-bedroom on “Friends”? So as I struggled to cram my belongings into my new postage stamp of a room in Astoria — yeah, not even in Manhattan — like many New Yorkers I laughed with recognition at the on-screen struggles of Abbi and Ilana.

Their apartments weren’t pretty. Barely furnished with used couches and Christmas lights. Abbi shares a cramped space with Bevers (John Gemberling), who walks around naked, eats her food, and throws away her stash of Bed Bath and Beyond coupons (they never expire!). In the recent final season, the old plumbing in her building becomes so clogged that her super suggests she buy a “shit bucket” in which to toss her used toilet paper. Apparently all the other tenants use one without making such a fuss. Abbi tries and fails to unionize her neighbors so they can demand basic functioning utilities, and I watched as my own century-old sink remained backed up with water from my morning shave, relieved to laugh at someone else’s poor pipes.

Ilana doesn’t have to deal with buckets in her own bathroom — well, actually she mistakenly defecates in Abbi’s shit bucket, but that’s just classic Ilana. However she soon learns her beloved roommate Jaime (Arturo Castro) is a hoarder. She’s only alerted to his secret collecting habit by the stench of a moldy bagel emanating from his chambers. As she removes the impossible amount of odd items from his four-foot long bedroom, I had flashbacks to my roommate horrors: the one who never unpacked and lived among smelly suitcases, the one who left food out for days to attract mice and the one who brought in bedbugs.

But I don’t just love “Broad City” for its recognizable situations. Glazer and Jacobson care about these characters and every wild moment is used to foster growth. That was especially true in this final season. For instance, Ilana learns that Jaime started hoarding to deal with the stress of taking his new relationship to the next level. When Jaime announces he is moving out to live with his new beau, Ilana is confronted with the crushing reality of having to live in this crazy city alone.

Partings were a huge theme throughout season five. It was most evident in Abbi’s decision to take control of her flailing career and attend an artist residency in Colorado. The two besties discover that their paths have ultimately grown in different directions and reach a difficult realization that their close-knit lives are about to unravel. It came to a head in a pitch-perfect series finale, in which the pair attend Abbi’s farewell party with all their close friends. Viewers are relieved to learn the duo remain friends four years later despite their physical distance. Most importantly, the camera lingers on a new pair of young women, who New York will now toss into a tornado of pizza-rats and bad catering gigs.

The city constantly throws distractions at the driven creative citizens who move here. We must navigate a perilous subway system filled with delays, strange odors and bodily fluids. We spend so much time toiling away in survival jobs to make rent, that we often grow distracted from the career that brought us to the city in the first place.

But New York also gives us friends to survive with, who help us deal with days where cellphones are lost or when we get conjunctivitis from falling air conditioner fluid (okay, fine, that last example probably only occurred in this series). That is what “Broad City” proved to be in the end: a series about friends so close they become family, friends who are lifelines for each other during the best period of life. That period doesn’t last forever, but the friendship does.

I’ve never seen my New York depicted on screen with such honest eyes as Glazer and Jacobson have looked on it with. Their ability to close out the series by maintaining their signature mix of comedy and heart, while adding a sophisticated message about personal growth, is a testament to their talents as writers and performers. I can barely afford my apartment and my sink is still backed up, but I would give Glazer and Jacobson every award possible for helping me laugh through New York’s ups and downs.