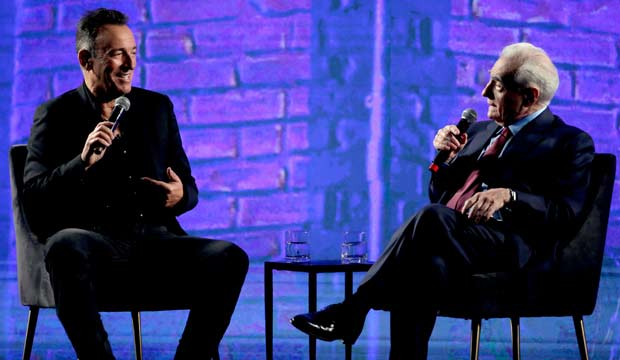 Bruce Springsteen rocked the house Sunday during a Q&A for Netflix’s “Springsteen on Broadway” moderated by Martin Scorsese. The two old friends swapped stories about their appreciation for music, the influence of Catholicism on their work and the origins of the Broadway show that inspired the Netflix special. It was the opening night event for the network’s FYSEE space at Raleigh Studios in Hollywood.

The Oscar and Grammy-winning rock star reveals the one-man show started with an invitation from former President Barack Obama to perform at the White House during his last days in office. “I had written [my] memoir,” he recalled, “and I said, maybe I’ll read from the book a little bit and play a few songs. When I went to read from the book, I realized reading something is different than the way you speak it, so I rewrote what I was going to say as a spoken word piece.” He played a 90-minute set in the East Room, and “there was just some alchemy there that felt right.”

When it came time to do the Netflix special, Springsteen recruited frequent collaborators Thom Zimny, who won an Emmy for editing “Bruce Springsteen and the E-Street Band: Live in New York City” (2001), and Jon Landau, who produced the band’s Barcelona special alongside Zimny. Before shooting started there was a debate about what the audience’s role would be, but they ultimately decided to keep the attendees off-screen, though you can certainly hear their reactions. “It was just the very simple approach of trying to shoot what the audience saw,” he explained, “but that’s a lot more complicated than it seems.”

Springsteen also credited Scorsese’s rock documentary “The Last Waltz” (1978) as an inspiration: Scorsese also elected to keep the audience off-camera while filming the final performance of The Band to distinguish it from other rock docs like “Woodstock” (1969) and “Monterey Pop” (1968). The director wanted to find out what would happen if “we just stay on the stage. What’s it like to be part of the band was the idea, and how do they work together to create one thing? What’s that language that they speak, and how do they create it onstage?” He found that after each song the performers “look like they’ve just been in a round at a prize fight,” which later inspired his approach to “Raging Bull” (1980).

Scorsese was struck by the fact that Springsteen’s documentary begins without filler. “The conventional way is to have you coming into the building… maybe interviews first,” he said. Instead, it begins with a closeup of his face. “It’s no nonsense. It begins. It’s all about him, you, there in one,” much like an actor or comic has to be on his own.

In order to achieve that kind of intimacy, Springsteen revealed, “you’ve got to make your internal life available, and you can’t worry about that. You’ve got to be ready to look into the camera, which is unforgiving and frightening.” The first night of filming, in fact, he remembered he was “doing the weirdest thing you can do onstage, which is think about what you’re doing.” That made him feel “out of myself way too much, and I was really concerned about it.”

But after some soul searching that night he came in the next day to find he was “more relaxed.” He added, “when you’re too completely self-conscious, you’re not in it, and when you’re not in it, you’re not making yourself available” when “the whole thing is about that. As long as you’re making your emotional life available … you are very watchable.” When you’re onstage “you’ve got to be in your story, recreating those experiences like they never happened before, and giving an audience access to them.”

That was certainly important with this show, in which Springsteen recounted stories from his life in-between songs that tied into them. It all adds up to what Scorsese described as “one musical expression” that was akin to “chanting in church.”

The monologues, Springsteen revealed, “were the essential part of the show.” Because “people had heard these songs before,” he wanted to find a way to “give them renewed meaning. I said, if I can contextualize them through the stories I’m telling so that people have a renewed vision into how they were written and what they were about,” the audience would hopefully “hear that song renewed again.” He found that when the show was working, “I joined the audience in a meditative experience simply about what life feels like.”

Both men spoke about how their Catholic upbringings inspired their work, with Springsteen describing “Raging Bull” as “one long, violent prayer,” and Scorsese saying the same about Springsteen’s work. Talent of any kind, Scorsese believes, is “a gift” from God, “so when you perform this gift, when you create, it really is prayer.” Springsteen agreed, saying that “if you’re very, very fortunate, and good at your job, you capture a small piece of the divine. It’s why the creative process has never been and will never be explained, because there’s a small, tiny divine part of ourselves that connects to something bigger than you.”

The careers of Springsteen and Scorsese launched in 1973, when the rockstar released his album “Greetings from Asbury Park, N.J.” and the director completed his film “Mean Streets.” The two met in 1975, along with Robert De Niro, and have remained friends ever since. Both men are Oscar winners: Scorsese for directing “The Departed” (2006), Springsteen for his original song “Streets of Philadelphia” from “Philadelphia” (1993). Scorsese also won Emmys for “Boardwalk Empire” and the documentary “George Harrison: Living in the Material World” (2011), while Springsteen was nominated at those kudos for his “Live in New York” special and the 2009 Super Bowl Halftime Special. He also won a Special Tony Award in 2018 in recognition of his Broadway show.

The evening came to a close with The Boss performing “Dancing in the Dark” and “Land of Hope and Dreams” on acoustic guitar. Audience members were then treated to drinks and hors d’oeuvres as they toured Netflix’s immersive FYSEE space, which features costumes and set pieces from dozens of the streaming service’s Emmy contenders, including “Ozark,” “House of Cards,” “The Kominsky Method,” and more.