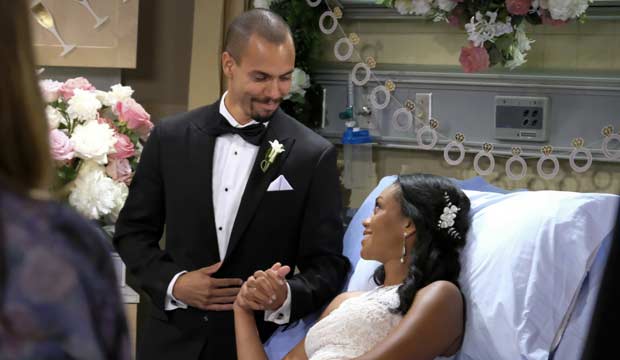 Bryton James is up for Best Supporting Actor at the Daytime Emmys this year. This is his second bid in this category and his seventh overall for his role as Devon Hamilton on “The Young and the Restless.” He last contended in this race in 2016, and before that he earned five nominations for Best Younger Actor, winning once in 2007.

These awards are decided by blue ribbon panels viewing sample performance reels from each actor. Although the Daytime Emmys did not release the drama acting reels to the public this year, they have been made available to the press. Below is an overview of James’s submission.

Synopsis: Devon lies in a hospital bed with his wife Hilary (Best Supporting Actress nominee Mishael Morgan) as she is dying. He remembers their happy times together, and weeps as she passes away in his arms. Later, Devon attacks his sister Lily (Christel Khalil) for causing the car accident that killed both Hilary and Devon’s unborn child. Devon rails against her for wanting Hilary out of his life, and for finally getting her wish.

We then see Devon in a therapist’s office as he struggles with depression and drinking due to the death of his wife and child. Devon feels that he has lost everything that gave his life meaning, and the weight of the loss is crushing him. The doctor offers to set up a treatment plan, but Devon is hesitant and outright refuses to take any pills.

Pros: James gives one of the most sympathetic performances in the category as Devon faces one tragedy after another. And rather than go over the top with despair, James gives us quiet anguish both in the scene where he tries to be strong for his wife in her last moments and later as he talks to his therapist. Those scenes are balanced by Devon’s angry moments with his sister, which allows voters to see a range of emotions in James’s performance.

Cons: James’s performance is largely one of subtle suffering. But subtle doesn’t often win at the Daytime Emmys, so voters may gravitate towards a showier performance. In addition, “Y&R” underperformed in the acting races, earning only five total acting nominations across seven categories, so maybe voters just weren’t as enthusiastic about the show this year.