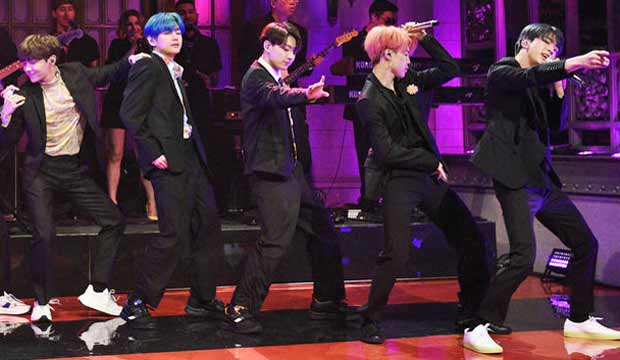 Top Social Artist is one of the only prizes at the Billboard Music Awards decided by a fan vote, and the K-pop sensations BTS have won it for the last two years in a row, thanks to their rabid fan base. They’re nominated again this year, so can they go 3 for 3? This time they’re up against two other K-pop favorites, EXO and GOT7. So they may be at risk of splitting the vote.

As K-pop has spread throughout the world, the seven-member boy band BTS have made history repeatedly. Their 2018 album “Love Yourself: Tear” was the first album by a Korean artist to hit No. 1 on the Billboard 200 albums chart. They were also the first Korean group to have singles certified gold by the Recording Industry Association of America. Their first Billboard Award victory for Top Social Artist in 2017 made them the first Korean artist ever to win at these kudos. And on April 13, they became the first K-pop artist ever to perform on “Saturday Night Live.”

But the Korean invasion didn’t stop with them. EXO have also charted on the Billboard 200 with their albums “The War” (2017) and “Don’t Mess Up My Tempo” (2018), while GOT7 made Billboard’s Top Heatseekers Chart twice with their albums “Flight Log: Turbulence” (2016) and “Present: You” (2018), though neither group has achieved the kinds of milestones at BTS have.

Perhaps the biggest threat to BTS’s Billboard Awards crown is the possibility that the three K-pop artists will divide support between them, opening the door for American fan favorite Ariana Grande or British heartthrob Louis Tomlinson. But according to the combined predictions of Gold Derby users, BTS will win their third consecutive title: they get leading odds of 11/2, followed by Grande (6/1 odds) and Tomlinson (7/1 odds). Their K-pop rivals GOT7 and EXO bring up the rear in our forecasts. Might we be underestimating the Korean challengers?