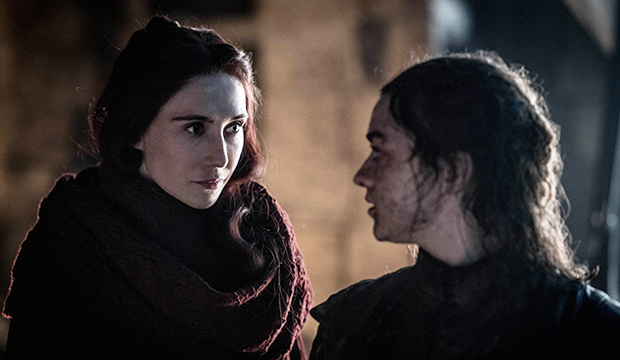 WARNING: The following story contains spoilers about the third episode of “Game of Thrones” Season 8, “The Long Night.”

Even though HBO’s hit series “Game of Thrones” has produced acting nominations for eight of its cast members at the Primetime Emmy Awards, only Peter Dinklage has won, 2011, 2015 and 2018. The guest acting categories in particular have been dark and full of terrors for “Thrones” actors, as they’ve had a difficult time getting into, let alone winning them. Carice van Houten could finally turn the tide, now that she’s eligible in the drama guest actress race after her character Melisandre’s surprise return in “The Long Night.”

So far, Diana Rigg and Max von Sydow are the only actors from this show to have snatched guest acting nominations, the former received four bids (2013-15, 2018), while the latter received one (2016).  Although Rigg was expected to win the Best Drama Guest Actress Emmy last year after her character’s drop-the-mic moment in “The Queen’s Justice,” she ended up losing to Samira Wiley (“The Handmaid’s Tale”). In his year, von Sydow also quickly became the odds-on favorite in Best Drama Guest Actor following his turn in “The Door,” arguably one of the show’s most soul-crushing outings. He, however, ended up losing the statuette to “Ray Donovan”‘s Hank Azaria.

But with this season of “Thrones” being its final one, it could be too big to ignore, even in categories where it doesn’t have the greatest track record. Emmy voters may want to give the show a goodbye hug by checking it off across the board, which could work in van Houten’s favor. As she’s been on the show since the second season, she’s had a lot of time to build up enough goodwill to nab her maiden bid and win.

Plus, not only was van Houten on the show for seven seasons but Melisandre was one of the main driving forces in the storyline. Her arc came full circle in “The Long Night,” as she reiterates the prophecy that Arya (Maisie Williams) will shut many eyes, including the Night King’s blue eyes. After the Night King and his Army of the Dead are finally defeated, Melisandre drops dead and fades into the dust, now that she’s served her ultimate purpose. Like her character, van Houten left with a bang and gave what was arguably one of her strongest and most impactful performances on the show. A Best Drama Guest Actress Emmy win would be a great send-off for someone who thoroughly turned in great work.

Could the nomination end up being her hurdle? Gold Derby exclusively revealed the category placements of the Emmy Award contenders for HBO last month, but van Houten was not listed. As this list was published before “The Long Night” aired, her absence could be due to the fact that HBO didn’t want to spoil her character’s return, since viewers had last seen her in the second episode of the seventh season. That said, van Houten, as well as her former co-star Indira Varma, would have both qualified for the drama guest actress race last year but weren’t submitted by HBO, most likely to reinforce Rigg’s chances of winning.

Should HBO not add van Houten on the final Emmy ballot again this year, her personal reps still have the possibility of doing so, which they didn’t do last year. That strategy worked out well for last year’s drama guest actress nominee Kelly Jenrette, who surprised everyone with her bid for “The Handmaid’s Tale.”

Be sure to make your Emmy predictions today so that Hollywood insiders can see how their TV shows and performers are faring in our odds. You can keep changing your predictions as often as you like until just before nominees are announced on July 16. And join in the fun debate over the 2019 Emmy taking place right now with Hollywood insiders in our television forums. Read more Gold Derby entertainment news.