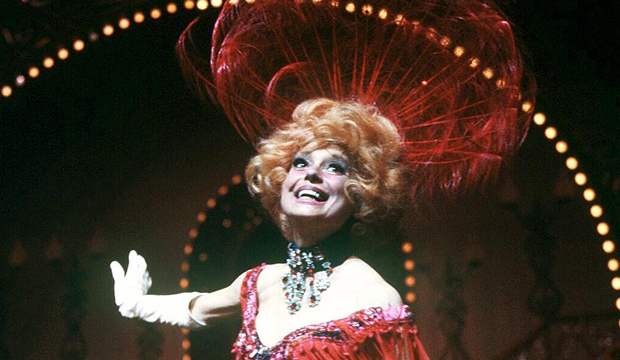 “Laughter is much more important than applause. Applause is almost a duty. Laughter is a reward.” — Carol Channing

If anyone has heard her share of both gaffaws and clapping, it would be Channing, who died on Tuesday 16 days shy of her 98th birthday. The Seattle native broke out on Broadway in 1949 in as Lorelei Lee, an irrepressible man-crazy gold-digger from Little Rock, Arkansas, in “Gentlemen Prefer Blondes.” She performed the showstopper, “Diamonds Are a Girl’s Best Friend,” which would be memorably warbled in the 1953 film version by Marilyn Monroe and influenced Madonna‘s 1985 music video for “Material Girl.”

Her unique voice, willowy stature and bigger-than-life personality proved to be a plus but also a minus, since she always fused her traits into her characters. In a cover story for Life magazine, she was described as “an over-grown kewpie” who sang like “a moon-mad hillbilly.” Still, Channing had out-sized talent enough to become one of the few performers who was ever nominated for a Tony Award in a revue rather than a musical for the short-lived “Show Girl” in 1961.

But in 1964, she found the perfect fit of a signature comedic role as matchmaker Dolly Levi in Jerry Herman‘s musical  “Hello, Dolly!” She won a Tony for Best Actress in a Musical and would star in revivals of the show throughout her career. She would also be honored with having the original Broadway cast recording being inducted into the Grammy Hall of Fame. The enduring musical was headlined by Barbra Streisand on the big-screen in 1969, which was nominated for seven Oscars and won three. In 1995, Channing was bestowed with a Lifetime Achievement Tony.

Channing only did a handful  films, including 1956’s “The First Traveling Saleslady” with Ginger Rogers and the 1968 cult movie “Skiddo.” But she managed to be nominated for a supporting Oscar for the flapper-era musical burlesque, “Thoroughly Modern Millie,” in a  flamboyant role as the wealthy widowed playgirl Muzzy Van Hossmere, upstaging both Julie Andrews and Mary Tyler Moore.

But she was much in demand as a TV guest star through the years — making appearances on everything from “The Andy Williams Show” in the ’60s to “Sesame Street” in the ’80s — and almost got her own sitcom thanks to Lucille Ball and Desi Arnaz, but the series was not picked up. She also had a recurring voice-over role as Grandmama on the animated version of “The Adams Family” in the ’90s.

But it was Channing herself who brought down the house as she went onstage.  She was handed a microphone and began singing, “Wow, wow, wow, fellas/Look at the old girl now, fellas!” She threw her arms in the air and then belted out, “Dolly will never go away again!” Neither will Carol Channing leave the hearts of fans who adored her throughout the decades.