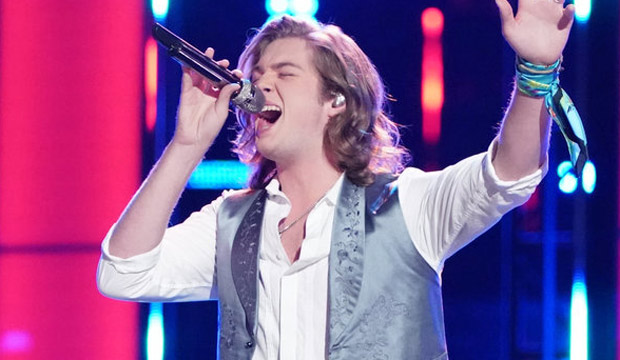 Tuesday night on “The Voice” Season 17, Carter Lloyd Horne of Team Blake Shelton won his live Cross Battle against fellow “heartthrob” Jacob Maxwell of Team John Legend. As a refresher, Carter had performed “Way Down We Go” on Monday while Jacob had belted out “You’re Still the One.” Since John wisely held onto his one and only Save for this type of scenario, he was able to keep Jacob in the competition. Now both of these young blond-haired artists — who also happen to be best friends — are moving on to the Finals. Do YOU think America made the right choice to keep Carter?

“I don’t know what’s going to happen here, but I want you to know that you’re on the right path,” Blake told Carter seconds before the big announcement was made by host Carson Daly. Blake continued, “You’ve got an incredible voice, dude. I’m not planning on this ending here, but if this part of the journey ends, music is still what you should be doing.”

As for why John pushed his Save button to advance Jacob to the Finals, he revealed, “Like I said, I love working with you and I think you have so much more in store. America needs to hear your voice some more, so we’re gonna keep working.”

The previous night Blake humorously instructed the viewing audience to “go back and look at Carter in the blind auditions and then listen to him again tonight and see how far this guy has come already in this competition.” He then added, “Man, you have this rich, incredible deep baritone voice that’s so cool, so unique. It’s still getting better before our very eyes, so great job tonight.”

At the conclusion of the live Cross Battles, Blake still has eight artists on his team: Carter, Oliv Blu, Kendra Checketts, Kim Cherry, Gyth Rigdon, Dexter Roberts, Selkii and Andrew Sevener. Which artist do you think has the best shot of joining “The Voice” winners list?