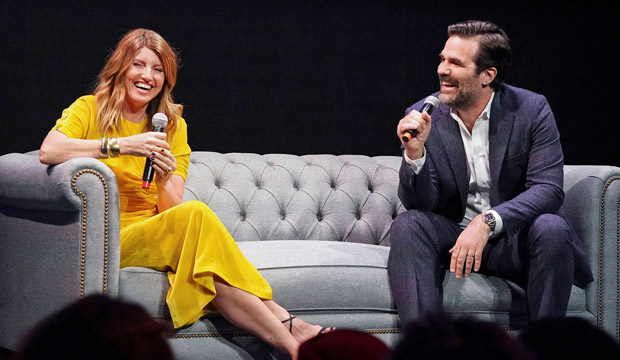 Thursday night at the famed Hollywood Athletic Club (where the first Emmys were held in 1949), Amazon’s month-long Emmy FYC experience welcomed “Catastrophe” executive producers/writers/stars Sharon Horgan and Rob Delaney for a screening of their series finale and a Q&A moderated by Entertainment Weekly’s Henry Goldblatt. Horgan and Delaney dished on the final episode, which streamed back in March, in front of TV academy members and also remembered the late, great Carrie Fisher, who earned a 2017 Emmy nomination for playing Rob’s mother on the show.

“That scene really makes me want to go to the toilet,” Horgan joked about the series finale that ended with the married characters taking a swim in the ocean after a huge fight. “[The ending] is kind of happyish depending on your disposition,” she added. Horgan and Delaney received an Emmy bid in 2016 for writing the pilot, which they confessed they never thought would get picked up let alone last for four seasons on Amazon.

Delaney chimed in about the final episode, “Well, you know that they’re in love, [which was] important to us. The previous seasons had always ended on some pretty substantial cliffhangers. We wanted this one to end in a way that you knew that whatever happened, it would happen while they were in love. That would kind of put the sort of explanation point on our thesis about marriage and parenting.”

“They’re facing a massive challenge there,” Delaney remarked about the characters’ journeys in the finale, which included losing a loved one, becoming pregnant for the third time and moving to another city. “There’s more to it but we ran out of film!”

Horgan admitted that the last episode “turned out how we wanted it to turn out.” As for swimming in the ocean, “We had that end scene in our heads before we even started writing the beginning of Season 4.”

“We were so stunned” when Fisher died in 2016, said Delaney. “We effectively pretended she wasn’t dead for the whole first five episodes [of Season 4]. We knew when we were going to address it. We figured if we waited a while that it would be more surprising to the audience because everybody in the world knows that the wonderful, beloved Carrie Fisher had passed away. We knew that the tribute to her in there had to be tonally appreciative and loving but, you know, barbed.”

Horgan added that the “tricky thing” about writing Fisher’s death into the show was that “it’s us saying goodbye to someone we loved and a character that was loved. But we also didn’t want it to feel too sad or maudlin. So when we came up with the idea of [Rob and Sharon] finding the email where she gets to insult Mike Pence, we thought, that’s so perfect and she would have loved that.”

With “Catastrophe” having signed off the airwaves after four seasons, might Horgan and Delaney one day want to revive the show? “Yeah definitely,” stated Delaney. “[But] I think we should wait a minute. A lot of people are doing reboots and ‘wait, no, it isn’t over.’ But yeah, [movie franchise ‘Before Midnight’] goes back every 10 years, so I think that would be a good time to do it.” Horgan then joked that she’ll only do a reboot if Richard Linklater directs it.