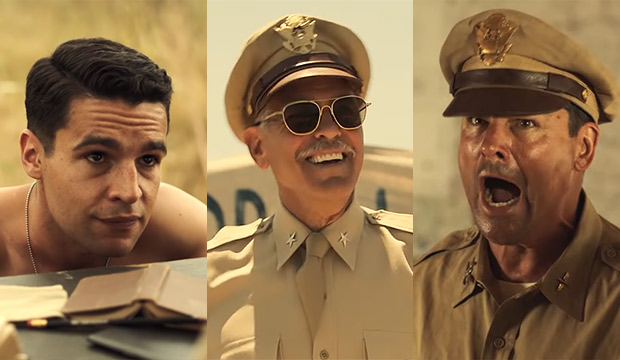 Hulu is making another play for its first Best Limited Series nomination with a high-profile contender in “Catch-22,” which is now available to stream in its entirety starting this weekend. The Italy-set World War II satire is summed up by Rotten Tomatoes in “Critics Consensus: A deft adaptation of Joseph Heller’s seminal novel, ‘Catch-22’s’ handsomely rendered, hilariously horrifying exploration of war soars thanks to its stellar cast and reverent adherence to its source material.”

Hulu is submitting only three actors for Emmy consideration: Christopher Abbott in Best Movie/Limited Actor and both Emmy winner Kyle Chandler and Oscar winner George Clooney in Best Movie/Limited Supporting Actor. Big names like Oscar nominee Giancarlo Giannini and Golden Globe winner Hugh Laurie are ineligible because they do not have the requisite screen time (five percent of the total run time) as Procurer Marcello and Major de Coverly respectively. Giannini and Laurie each appear in only three of the six episodes, as does Clooney, while Abbott and Chandler are in all six.

Although Chandler has more material as Colonel Cathcart than Clooney as General Scheisskopf, the latter might be positioned better for a nomination, which is reflected in Gold Derby’s odds. By releasing all six episodes in the last two out of 52 weeks of eligibility, Hulu likely intends for “Catch-22” to be one of the last shows that Emmy voters watch before marking their nominating ballots. If voters only have time to sample the show, Clooney could benefit from immediately making a strong impression. The first episode almost opens with a three-minute monologue shouted by Clooney, complete with dancing.  He exits by the middle of the episode, with Chandler arriving toward its end, picking up where Clooney left off as an unhinged authority figure who farcically antagonizes the archetypal straight man played by Abbott.

Clooney only returns in the second half of the fifth episode, but his extended absence actually works in his favor because it reminds of his commitment to the show, ironically enough. Clooney was originally cast in Chandler’s role, but traded down to a smaller role to focus more on executive producing the series and directing the fourth and sixth episodes. This is a passion project for Clooney and the Emmys frequently celebrate hyphenates.

The darkly comedic “Catch-22” marks a change of pace for Chandler, who has bounced in recent years between intense leading roles in television dramas (“Bloodline,” “Friday Night Lights”) and reserved supporting roles in prestige films (“Argo,” “Carol,” “First Man,” “Manchester by the Sea,” “The Wolf of Wall Street,” “Zero Dark Thirty”). His high-strung “Catch-22” performance is reminiscent of Tony Shalhoub’s in “The Marvelous Mrs. Maisel.” “Catch-22” is more comfortable and familiar ground for Clooney, who has toed the line of absurdity with appearances in Coen brothers films.

In the lead role of Captain John “YoYo” Yossarian, Abbott’s material is relatively dramatic and grounded, as YoYo struggles to cope with the madness perpetuated by the colorful supporting characters around him. The everyman qualities of the character and Abbott’s lack of name recognition might hold him back  but a nomination is within reach and voters could see his work as a revelation if they know him only from his parts as a boyfriend in “Girls” or the husband in “The Sinner.” This miniseries rides on how compelling viewers find him as an anchor and his category in particular has recognized breakthrough performances lately, awarding his generational peers Riz Ahmed (“The Night Of”) and Darren Criss (“The Assassination of Gianni Versace”) the last two years.

What major nominations do you think “Catch-22” will receive? Make your Emmy predictions today so that Hollywood insiders can see how their shows and performers are faring in our odds. You can keep changing your predictions as often as you like until the nominations announcement on July 16. And join in the debate taking place right now with Hollywood insiders in our television forum. Subscribe to our podcasts at either Google Play, iTunes, Libsyn, Spotify or Stitcher.