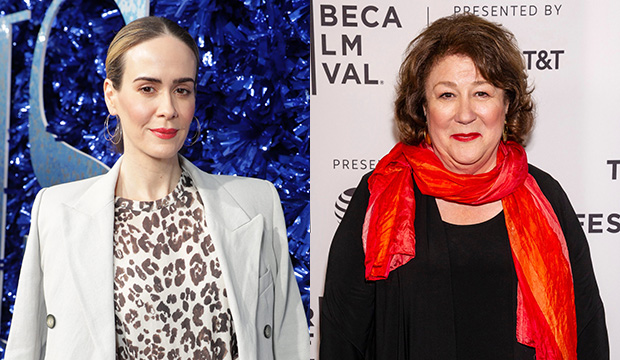 Tuesday, May 14 is Cate Blanchett‘s 50th birthday. And perhaps as a gift to all of us, FX has revealed the star-studded ensemble cast of the Oscar winner’s upcoming limited series “Mrs. America.” Seriously, this cast is no joke. They are coming for all the Emmys.

Sarah Paulson, Margo Martindale, Rose Byrne, Uzo Aduba, Tracey Ullman, John Slattery and James Marsden are among the 11 stars joining the show. “Mrs. America” stars Blanchett, in her first American TV series role, as Phyllis Schlafly, the conservative who sparked a backlash during the movement to ratify the Equal Rights Amendment. The series will explore “how one of the toughest battlegrounds in the culture wars of the ’70s helped give rise to the Moral Majority and forever shifted our political landscape,” per the logline.

SEE Sarah Paulson could be this year’s Tatiana Maslany now that ‘AHS: Apocalypse’ is in drama

Here is the breakdown of the newly cast roles:

Byrne as Gloria Steinem: The most recognizable leader of the women’s movement, Steinem co-founded “Ms. Magazine” and played a major part in the effort to pass the ERA.

Kayli Carter as Pamela: A fictional character, Pamela is a young, impressionable housewife who is an early member of Schlafly’s anti-ERA movement.

Ari Graynor as Brenda Feigen-Fasteu: A Harvard-educated lawyer, Feigen-Fasteau co-founded “Ms. Magazine” with Steinem and helped the feminist effort to pass the ERA.

Melanie Lynskey as Rosemary Thomson: Thomson was a homemaker in Schlafly’s inner circle who joined her fight against the ERA.

Marsden as Phil Crane: Crane was a conservative congressman from Schlafly’s home state of Illinois and one of her most powerful allies.

Martindale as Bella Abzug: A leading figure in the feminist movement, Abzug was a three-term congresswoman who spearheaded the effort to pass the ERA.

Paulson as Alice: A fictional character, Alice is Schlafly’s best friend who joins her efforts to block the ERA.

Slattery as Fred Schlafly: Schlafly’s husband, who was a prominent lawyer, GOP donor and anti-communist.

Jeanne Tripplehorn as Eleanor Schlafly: Fred’s unmarried sister and a confidant of Phyllis, Eleanor is a devoted aunt to Phyllis’ six children.

Ullman as Betty Friedan: Known as the mother of the women’s movement and an active proponent of the ERA, Friedan wrote “The Feminine Mystique” and co-founded the National Women’s Political Caucus.

“Mrs. America” is written by Emmy winner Dahvi Waller (“Mad Men”). “Captain Marvel” co-writers and co-directors Anna Boden and Ryan Fleck will direct the first two episodes and serve as executive producers. The nine-episodes series, which Blanchett will also executive-produce, will premiere in 2020, so better clear some room in your Emmy predictions now.