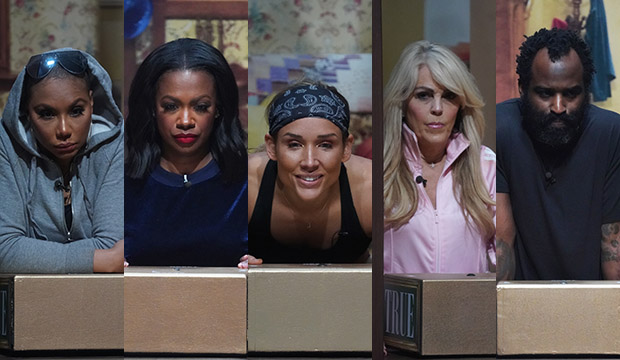 We’re down to a final five on “Celebrity Big Brother”: Tamar Braxton, Kandi Burruss, Lolo Jones, Dina Lohan and Ricky Williams. And three will be gone on Wednesday’s finale after the final five eviction and the final four HOH cuts two people before a winner is crowned. Brutal. So technically only two will be “eligible” for the win at the end, but who of the remaining five has been playing the best game and, well, deserves to win?

Tamar Braxton
Tamar is a person of extremes and clearly doesn’t know the definition of “threat” and “bullying.” She can flip out about jumping three feet off a ledge and refuse to go inside a haunted house one week, but then pull out crucial wins another (winning safety and the double eviction Veto to lock up Tom Green‘s eviction). She also won an HOH that knocked out Kato Kaelin. So it’s been a pretty good couple of weeks for her, and her place in the house is currently the best out of everyone’s. She has her Bedroom Alliance pals, Ricky and Lolo, but she’s also mended fences with Kandi, who might bring her to the end.

SEE ‘Celebrity Big Brother 2’: Who do you want to win?

Kandi Burruss
Kandi has arguably played the smartest game out of everyone. Yes, she’s been on the block the most, but outside of her and Tamar hashing it out over whatever the hell went on last year during her tour, she stayed out of the drama while the Not Fun Alliance took out the boys and then imploded and turned on Tomato. She sat back, observed and scooped up Tom after Kato left. But most importantly, she was the mastermind behind Natalie Eva Marie‘s eviction, talking Tom into it when he was dead set on targeting Ricky. She is a legit threat to win, but the only thing holding her back is that she has yet to win a comp and control her fate (and just, you know, rest easy for a couple days knowing you’re safe).

Lolo Jones
Lolo has been the messiest player this season. As the wise Joey Lawrence once said, “She burns hot, that one.” She’s volatile and emotional and a hypocrite, claiming she’s been completely loyal this game when she was the one who flipped off and flipped on her alliance members and alleged Olympic BFF Ryan Lochte (they’re not close and haven’t been on an Olympic team together in seven years) and Jonathan Bennett. But she’s also won when she’s needed to, bagging the Veto on Tamar’s HOH to get Kato evicted and winning the double eviction HOH to get out Tom. (Though how hilarious would it have been had she gotten her HOH revoked when she stalled on naming a second nominee?)

Dina Lohan
How differently would this season have gone had Jonathan let Ryan nominate Dina like he had wanted to? We need a “Celebrity Big Brother 2: Sliding Doors.” Dina is mostly a space cadet in there who is getting catfished and doesn’t know it, but she was aware enough to know that Natalie and Lolo had to be broken up and told Tom as much. She’s the most likable of the final five, having befriended everyone — no one has any issues with her — and also has no blood on her hands. That’s mostly because she, too, has yet to win anything.

Ricky Williams
The last man standing, Ricky has played a the type of game that normally would bite you in the ass. (Well, we guess it nearly did since Tom wanted him out.) So perhaps points to him for making it this far. He was mostly alone in the game until he got pulled into the Not Fun Alliance, and then he infamously vetoed the Fun name and any name altogether. Not really the type of response you want to hear from your supposed ally. He also benefited from being in the same bedroom as Natalie, Lolo and Tamar as the house turned on Tomato. But Ricky’s best play has just been being chill (shocking from a dude who quit football to smoke pot). He’s the most levelheaded one of his side of the house and has been their calm sounding board while also coming up with a game plan for him, Natalie and Lolo as they were breaking off from Tomato.