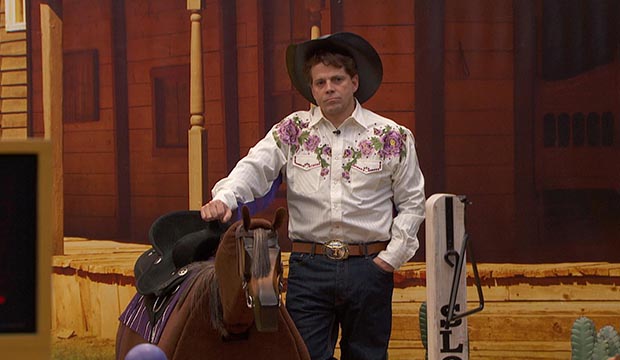 We still have to wait until Friday’s episode to find out exactly why Anthony Scaramucci left “Celebrity Big Brother” after six days, but we got a little bit more information on the live feeds Wednesday night.

The remaining houseguests are just as confused as we are, but it seems like they have reason to believe, and aren’t just speculating, that the Mooch was a mole in the game — as was first mentioned by Lolo Jones and Natalie Eva Marie — and didn’t just quit on his own. During a backyard conversation around 11:22 p.m., Dina Lohan, Kato Kaelin and Tom Green reminisced about the swinging champagne bottle comp, in which Dina was paired with the Mooch. Dina remarked that the Mooch was pretty terrible at it, and we got this exchange:

Tom: Why would he over-exert himself on that? I mean, he had nothing at stake.

Dina: But for me, he had to act like he was.

Kato: It’d be funnier if the audience were in on the joke and we’re not, if they’re watching Mooch swing.

Tom: I’m trying to figure out if they revealed it in advance or not.

Kato: I think it’d make some sense. They had to.

Dina: Yeah, because it makes the show better.

Tom: Yeah, I guess people would be disappointed if they surprised the audience too.

Tom: Do you think when he went to the Diary Room, he would go in a trap door and go talk to Julie and stuff?

Kato: Yeah, it’d be like a door he can walk in. Yeah, that’s where he went. To Julie or whoever. He’s getting [told], ‘Here’s what you do.’ I mean, I can’t imagine any other way.

Tom: It’ll be fun to watch that.

No, guys, we weren’t told anything! Talk more! Tell us more!

OK, well, Tom did. Half an hour later, while giving a house tour to live feeders, he pointed to the Mooch’s grayed-out photo on the memory wall and told us he was a mole.

“The Mooch has now gone gray because he pulled a hilarious prank on us on ‘Big Brother,'” Tom said. “You got us. He was a mole. I was actually pretty duped by that. I was certainly spending a lot of time hanging out with Mooch. He’s a great guy. We had some amazing conversations. He’s hilarious and really interesting and full of all sorts of incredible information.”

That’s the most definitive statement we’ve gotten about what went down with the Mooch. It sounds like he or Julie revealed to the house that he was a mole and he left. The question is still why though, and was he really in on it? The CBS promo guy teased “a shocking new twist will send a second celebrity packing” at the end of Wednesday’s episode, which kind of implies that the celeb (Mooch) falls victim to the twist, not that he was part of it. But again, if he was a mole, what was the purpose? What did he accomplish in six days in the house? Does he get to come back? Is that the “cliffhanger” the Mooch teased in Switzerland on Wednesday?

So many questions, so few answers.