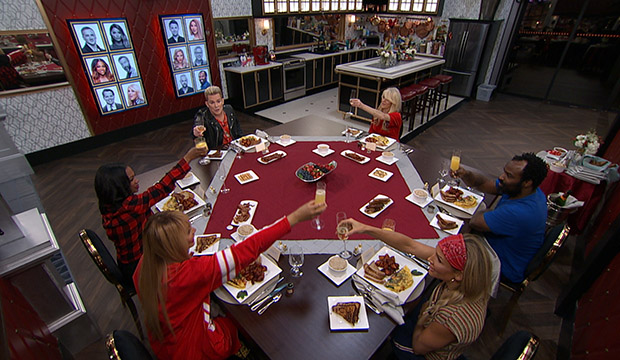 Well, so much for that. Lolo Jones won the final Veto on Monday on “Celebrity Big Brother,” which means there is no chance of her getting backdoored like her Bedroom Alliance members Ricky Williams and Tamar Braxton had discussed.

In retrospect, the chances of that backdoor happening were slim. Tamar suggested getting Lolo out before the final four and Ricky was reluctant, only agreeing that he would put Lolo, not Tamar, up if nominees Dina Lohan or Kandi Burruss won the Veto. Unsurprisingly, Dina and Kandi are still incapable of winning a comp. Man, how much more interesting would the last couple of HOHs have been if either of them had snuffed out an HOH or a Veto so we’d have some power shifts instead of one side running things? Sigh. Even Ricky or Tamar winning Veto could’ve been potentially incendiary if they decided to get #bloodontheirhands and actively backdoor Lolo.

But now the entire Bedroom Alliance will make the final four since it’s unlikely Lolo will use the Veto and said so as much on Monday night. So the next question is, who of Dina or Kandi to evict? Lolo wants Kandi outta there since Kandi told her on Sunday that she won’t take Lolo to final two. But Tamar and Ricky would rather Kandi stay because they wouldn’t be able to take it if they lost to Dina.

SEE ‘Celebrity Big Brother 2’ spoilers: The Round 6 Veto winner is…

“If I came all this way for Dina to win,” Tamar said, “I cant swallow that.”

“[Lolo] is going to want Dina. Dina is the only person she thinks she can beat,” Ricky pointed out.

Ricky suggested to Lolo that she try to make a deal with Dina: She’d use the Veto on Dina if Dina agreed to take her to the final two if she wins. “But what are the odds of her winning, and is it worth ripping up what we have?” Lolo countered. Touche. She said she doesn’t believe Tamar would vote to evict Kandi, which means it would come down to a tiebreaker. Ricky said he hadn’t decided what he would do in that case.

SEE ‘Celebrity Big Brother 2’ spoilers: The Bedroom Alliance is getting ready to turn on each other, and we are here for it

Lolo then told Ricky and Tamar that keeping Kandi is of no benefit to her. “Why would I want to have her in the final four?” she said. “Kandi already put her cards on the table that I was a bigger threat, and she has had a better relationship with you guys.”

Eventually, Tamar told Lolo that she would have no problem voting out Kandi. Tamar said that Dina has been closer to winning HOHs, but . Lolo reminded Tamar that Kandi has the days down cold if that’s the final HOH. “It has always been one of the comps,” she said. “Kandi would know more than Dina for the last one.”

Lolo ultimately said she doesn’t care who leave as long as she, Ricky and Tamar come to an agreement. On Tuesday morning, it seemed like Lolo was coming around to, or at least thinking about, keeping Kandi. She told her that she wouldn’t use the Veto because Tamar doesn’t want to go back on the block as the renom, but that “the house was already leaning on keeping you to play. We all wanted the people who played.”

Keeping Kandi would be the best scenario for Tamar’s game because she will have someone who’s willing to take her to final two from both sides. If she can work her magic and convince Lolo to keep Kandi, that would be a notch on her belt for her case to win. But Lolo is many things, but she’s not a dummy. She doesn’t trust Kandi and knows Dina would be better for her game, but will she put her game first or her alliance first? The three of them cannot make it to the end together, so she should push for Kandi to go, especially since Tamar said she would have no issue voting her out.

But this is all probably a moo point because whoever stays will flop the HOH again.