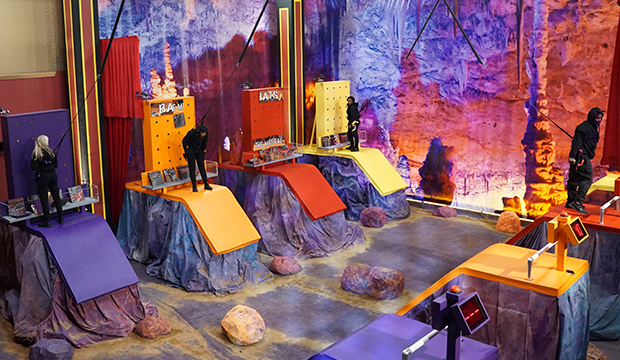 The final five eviction will come down to the wire on “Celebrity Big Brother” because the live feeds are now done. Lolo Jones did not use the Veto on Tuesday, so Kandi Burruss and Dina Lohan remain on the block, and Tamar Braxton continued to try to work her magic to convince Lolo to save Kandi instead of Dina. And it worked. For a bit.

Both Kandi and Dina made pitches to Ricky Williams and Lolo, and Kandi even accepted Ricky’s final two offer if he saves her in the event of a tiebreaker. Lolo started leaning to the side of evicting Dina after Kandi said that Dina would win against all of the min the final. “I did agree with that,” Lolo told Tamar. “Then you have your answer,” Tamar said.

Tamar’s been masterful covering her tracks with Kandi ever since they kissed and make up. She has her Bedroom Alliance on one side and Kandi on the other to take her to the final two if Kandi stays. And she hasn’t been forcing the issue when she suggests it’s better to keep Dina, saying she doesn’t believe Kandi would take her and that Dina would beat them all, which she wouldn’t be able to take.

SEE ‘Celebrity Big Brother 2’ spoilers: The Round 6 Veto winner is…

It appeared to be lights out for Dina until Ricky told Lolo Tuesday evening that he’s no longer OK with keeping Kandi because she is a bigger threat and he believes Dina is beatable in the final two because, well, what has she done? With Lolo onboard, Ricky pitched the same thing to Tamar, telling her that Kandi is telling people she’s taking him to the final two. Tamar said she’s cool with that because it’s good for him and Dina probably wouldn’t take him and she would beat all of them.

Tamar, who assured Lolo she doesn’t have a final two with Ricky (lol), then basically had the same conversation with Lolo, telling her that she doesn’t want to evict Kandi because of their renewed friendship. Lolo reiterated that Kandi is better with the days and Kandi wouldn’t hold it against Tamar if she were evicted because Tamar has saved her once, so Kandi would still likely vote for Tamar to win. Lolo reported Tamar’s reluctance back to Ricky, who said that he would just be the tiebreaker to boot Kandi if Tamar is not onboard.

And Tamar is not going down without a fight. On Wednesday morning, she told live feeders, “I ain’t never been known to take anything lying down. They tried it. They going to tell me last night I ain’t got no choice, they going to kick Kandi off … and don’t tell her.”

SEE ‘Celebrity Big Brother 2’ spoilers: The houseguests are torn over who to evict after that lame Veto result

Tamar asked Ricky about his change of heart, and he said it as an accumulation of things that “didn’t sit right with me” about Kandi. “It’s not personal because I like Kandi,” he said. “I think she is a sweet person, but not today.”

Tamar pointed out that Kandi said she would take Ricky to final two, which he dismissed because he doesn’t think either Kandi or Dina would win the final HOH anyway. He still believes Dina is easier to beat because she “doesn’t know anything about the game.” Insisting she doesn’t think it’s a bad idea, Tamar said she’s just confused about how this came about and keeping Dina doesn’t sit right with her.

And with that, the feeds cut for the season, so we have a cliffhanger until the live finale. If Tamar can get Ricky and Lolo to keep Kandi, then honestly she deserves to win. It’s one thing to save your own butt, but it’s another to repeatedly save somebody else’s who’s not even in your alliance.