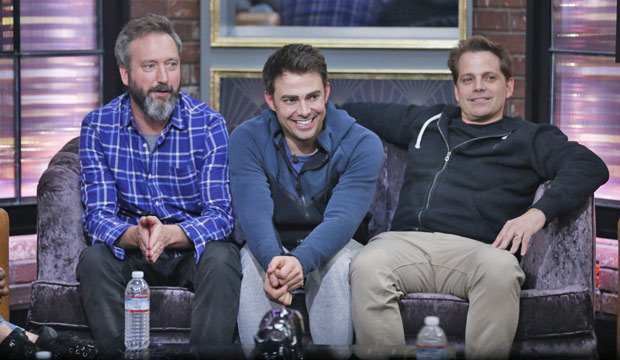 No one wants to be the first person eliminated from a reality TV show, but this week that’s about to happen to someone on Season 2 of “Celebrity Big Brother.” Heading into Wednesday’s Veto episode, the three nominees for eviction were actor/comedian Tom Green, actor/host Jonathan Bennett and former White House communications director Anthony “The Mooch” Scaramucci. While Jonathan is on the block by default (since he lost the battle against Ryan Lochte), the other two were nominated by Ryan after he became Head of Household. So who won the Power of Veto on Wednesday, and did they use it to save Tom, Jonathan or the Mooch?

Below, check out our minute-by-minute “Celebrity Big Brother” recap of Season 2, Episode 3 to find out what happened Wednesday, January 23 at 8/7c. Then be sure to sound off in the comments section about your favorite houseguests on CBS’s reality TV show, who annoys you the most, and who you think will ultimately join the “Big Brother” winners list. Keep refreshing/reloading this live blog for the most recent updates.

8:00 p.m. — “Previously on ‘Celebrity Big Brother’!” Host Julie Chen Moonves shocked the house when she announced a new twist: the winning pair of the first competition (Ryan and Jonathan) would face off in a mano-a-mano battle, with the winner becoming HOH and the loser going on the block. Ryan ended up beating Jonathan in the nail-biting challenge, so he earned the season’s first key to the Head of Household room. Jonathan was soon joined on the nominees’ sofa by Tom and the Mooch, but with the Veto on the line, anything can still happen. Let’s go!

8:05 p.m. – Following the nomination ceremony, Ryan reveals he put up the Mooch because he’s so smart and Tom because he’s a “sleeper” they need to look out for. Mooch isn’t happy to be on the block, but he respects Ryan’s strategy. Jonathan doesn’t seem worried, but you know what they say in “Big Brother!” Expect the unexpected.

8:10 p.m. – Tamar Braxton feels bad for Anthony because he’s always getting “tough breaks.” Really? Lolo Jones saw that Jonathan convinced Ryan to change his mind, keeping Dina Lohan off the block. They have lost trust in Jonathan, which could kill his game. Jonathan and Ryan are “ride or dies” and have full trust in each other, but clearly Jonathan is the brains to Ryan’s brawn. Meanwhile, downstairs Tom is grilling Anthony about how Donald Trump became such a master of Twitter. Mooch explains that Trump played the media like a fiddle and still does.

8:15 p.m. – Tamar, Lolo and Natalie Eva Marie are working out in the gym when they are interrupted by Jonathan. The encounter was short and awkward and the girls are now convinced he’s got to go! Lolo asks, “So soon?” to which Tamar replies, “He’s on the block!” Natalie isn’t ready to dump him just yet, but Tamar wants to take advantage of this now. She’s sick of watching the show and seeing all the girls “be stupid with their emotions.” She wants Jonathan gone!

8:20 p.m. – Lolo and Natalie have a final two alliance, but stupidly Natalie begins discussing it right in front of Tamar. Natalie had no idea Tamar was in the bed giving her a side eye and Lolo is mortified. Tamar can’t even believe what just happened and gives them a final two name: “Busted.com.” Natalie tries to play dumb but Tamar isn’t buying it for a second. Then Lolo defended Natalie by telling Tamar they figured she had a final two with Kandi Burress. Tamar joked about punching Lolo in the throat, but Lolo is all offended. The uncomfortable talk is once again interrupted by an awkward entrance from Jonathan.

8:25 p.m. – Tamar smooths things over with Lolo, but in the Diary Room she reiterates she’s not stupid! She’s tired of how confident Jonathan looks around the house. She’s seen enough “Big Brother” to know Ryan and Jonathan have a final two deal. Lolo is jealous of Jonathan because she thinks Ryan should be on her side. Ryan and Jonathan realize the girls are acting cold and have a feeling they are scheming. Ryan is ready to win the Veto and put up one of the girls now and send them home. Lolo can’t control her feelings and flips Ryan and Jonathan the bird while they were in the kitchen and now they’re gunning for her.

8:30 p.m. – It’s time to pick players for the Veto competition! Who will join Ryan, Anthony, Jonathan and Tom in the game? Ricky Williams was the first picked. I almost forgot he was on this show! Next, Joey Lawrence was picked and the competition is looking stacked!

8:35 p.m. – On “go,” players will rock their horses back and forth. Once they’ve rocked it 60 times, they have 30 seconds to run and stack gold bars on a giant horse shoe before running back to rock their horse again. The first player to stack 50 gold bars on their horse shoe will win the Power of Veto! Jonathan is feeling the heat and is determined to win, but others like Joey don’t want the target on their back. Tamar, who appears to be the most perceptive in the house, instantly realizes Joey is trying to throw the competition.

8:40 p.m. – At this point Jonathan, Ricky and Tom are pulling away from the pack. Suddenly, Jonathan’s bricks fall down and his game begins to flash before his eyes. Then, just like that, Tom’s tumble as well and Ricky wins the Power of Veto! He didn’t really want to win it, but he did. “Yee-Haw!” Ricky isn’t sure what he’s going to do with his new power, but he better figure it out quickly!

8:45 p.m. – Ricky has been trying to lay low (and succeeding) but this Power of Veto is going to make things a bit more difficult. Tamar and Kandi are whispering in the bathroom and begin to hash out their differences. Apparently they toured together last year and Tamar feels like Kandi interjected herself in Tamar’s business while she was going through hard times. Kandi doesn’t remember it like that, but Tamar feels like Kandi was completely disrespectful. Kandi begins to laugh and Tamar gets upset and walks away. Kandi thinks Tamar is ridiculous and Tamar is sobbing in the Diary Room. Oh, the drama!

8:55 p.m. – While the women engage in drama, Ryan pulls Ricky aside to work out a deal. Ryan tells Ricky that the girls have an alliance and want to vote out Jonathan. At this point, the guys outnumber the girls so they should stick together. If Ricky uses the Veto, Ryan could put up Lolo. Meanwhile, Kandi and Tamar are still working through their issues. Tamar is an emotional wreck and Kandi is trying to brush things aside. Hoping to stir the pot, Ricky goes to tell Lolo that Ryan wants her on the block. Lolo is gutted and doesn’t know who to believe.

8:59 p.m. – Lolo tells Tamar to pull it together for a second so they can talk business. She reveals that Ryan wants to put her on the block. Kandi enters the room and Tamar agrees to let their drama go because there are bigger fish to fry. The women must revolt to keep Lolo safe! Finally, it’s time for the Veto meeting. With the power in his hands, Ricky has decided NOT to use the Power of Veto! He said nobody gave him a strong enough offer and he didn’t want to get blood on his hands. It wasn’t worth it. So, who will be the first celebrity evicted from the house? And what shocking new twist will send a second houseguest packing? Find out Friday on “Celebrity Big Brother!”