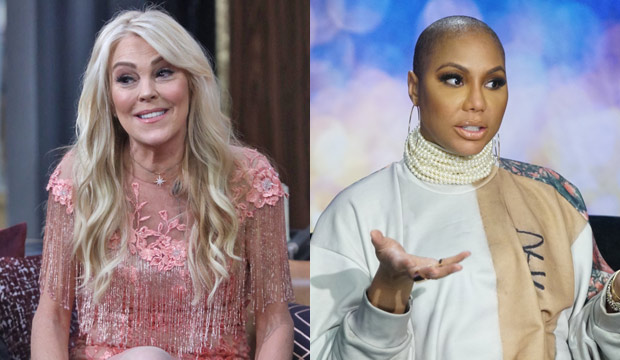 Monday night on “Celebrity Big Brother” Season 2, the second houseguest was evicted live following last week’s near-unanimous vote of actor/host Jonathan Bennett. Heading into the episode two celebs were on the chopping block: self-proclaimed “momager” Dina Lohan and singer/TV personality Tamar Braxton. However, with a Veto competition still on the line, anyone could still go home aside from Head of Household Kato Kaelin. So how did the second live episode play out?

Below, check out our minute-by-minute “Celebrity Big Brother” recap of Season 2, Episode 6 to find out what happened Monday, January 28 at 8/7c. Then be sure to sound off in the comments section about your favorite houseguests on CBS’s reality TV show, who annoys you the most, and who you think will ultimately join the “Big Brother” winners list. Keep refreshing/reloading this live blog for the most recent updates.

8:00 p.m. — “Previously on ‘Celebrity Big Brother’!” In Sunday’s episode Dina took the heat for being the only houseguest to vote to keep Jonathan. She had an axe to grind with Kato for lying to her about the vote and audibly rooted against him in the HOH endurance comp. Unfortunately for Dina, that made her Kato’s #1 target when he won the key to the Head of Household room. But even though Dina and Tamar are on the block, Kato hinted that he may be considering backdooring physical threat Ryan Lochte instead. So. Much. Drama!

8:10 p.m. – The nomination ceremony is adjourned and Tamar is furious. Kato reveals in the Diary Room that Ryan is his real target, but he wouldn’t be sad to see Tamar or Dina go if Ryan manages to win the Veto. Tamar is spouting off in the kitchen now about what she perceived as sexist comments from Kato. She didn’t like his comments of “Go home and be with your son,” and “clean up a little.” Meanwhile, Kato pulls a crying Dina aside and tells her that she isn’t going home and he wants her to hold it together. Now Tamar is sobbing in the bedroom while she vents to Lolo Jones and Natalie Eva Marie. Lolo and Natalie give Tamar a pep talk to win the Veto and pledge they will play for her as well.

SEE ‘Celebrity Big Brother’: How to vote for Power of the Publicist twist

8:20 p.m. – Tamar decides to go speak to Kato in the HOH room to let him know that she’s hurt and thrown off by being nominated. She felt it was personal and he is adamant that he never meant to be malicious. Tamar admits that she took his statements the wrong way and apologizes. Then she gets to business and asks why she was actually nominated because she doesn’t feel like a threat. Kato makes a terrible choice and reveals that he can talk to her more about his plan after the Veto competition. Next, Tom Green and Lolo are in the HOH room talking with Kato. Tom pitches a four-person alliance of himself, Kato, Lolo and Natalie. Lolo agrees that it’s a good idea, so Kato decides to tell them his plan to backdoor Ryan. Ryan catches the four of them talking on the patio and knows they want to evict him. He’s determined to win the Veto.

8:25 p.m. – Ryan tells Joey Lawrence that Lolo, Natalie, Kato and Tom are in an alliance. Then, Ryan and Joey pull Kato aside in the pantry and ambush him. They ask him if they need to pack their bags and Kato practically freezes. He then tells them that either of them going on the block “could happen.” Joey and Ryan are more determined than ever to win this all-important Veto!

8:30 p.m. – It’s time for the live Veto competition! In “Worldwide Rollout,” the houseguests will each launch their own movie. One at a time they roll their ball around a globe in attempt to land in the highest-numbered slot, representing their opening weekend gross. Tom is up first and rolls $35M. Dina is second and rolls it off the board for a $0. Kato is third and rolls $15M. Natalie rolls it off the board for $0, Tamar lands at $35M to tie Tom and Joey goes last, getting $25M. Tom and Tamar are going into a tie-breaker shoot-out! Tom scores $70M putting the pressure on Tamar! She then hits $45M and Tom wins the Power of Veto! Will he use it to help Kato backdoor Ryan? We’ll find out soon!

8:40 p.m. – It’s time to begin the Veto meeting. Tom heads to the front of the living room and reveals that he will use the Power of Veto on Dina. Kato must now name a replacement nominee and, as expected, he puts Ryan on the block while wishing him good luck at the Tokyo Olympics. Will Tamar or Ryan be the evicted? We’re about to find out.

8:55 p.m. – It is now time for the live vote and eviction! Voting for Ryan: Tom, Lolo, Dina, Natalie, Kandi Burress and Ricky Williams. Voting for Tamar: Joey. By a vote of 6-1, Ryan has been evicted from the house!