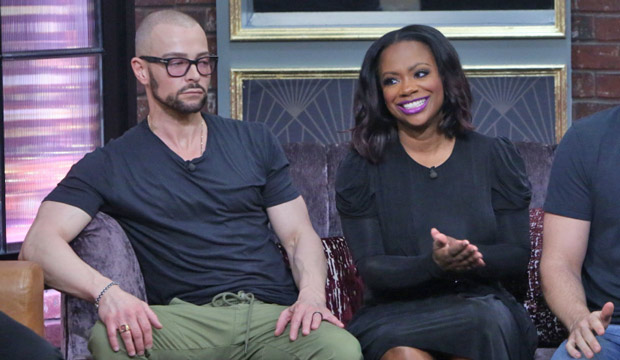 Saturday night on “Celebrity Big Brother” the third houseguest was evicted, following in the unfortunate footsteps of Jonathan Bennett and Ryan Lochte. At the start of the episode both Joey Lawrence and Kandi Burruss were on the chopping block after Head of Household Tom Green nominated them for eviction, but with a Veto competition on the line there was no telling who’d soon go on to have a one-on-one chat with host Julie Chen Moonves.

SEESorry, Kandi Burruss: 41% of America wants you evicted from ‘Celebrity Big Brother’ on Saturday instead of Joey Lawrence

Below, check out our minute-by-minute “Celebrity Big Brother” recap of Season 2, Episode 8 to find out what happened Saturday, February 2 at 8/7c. Then be sure to sound off in the comments section about your favorite houseguests on CBS’s reality TV show, who annoys you the most, and who you think will ultimately join the “Big Brother” winners list. Keep refreshing/reloading this live blog for the most recent updates.

8:00 p.m. — “Previously on ‘Celebrity Big Brother’!” In Wednesday’s episode Tamar Braxton was rewarded with the Power of the Publicist, a twist that gives her safety at the next two nominations ceremonies or Veto meetings. So far she hasn’t had to use it, but if tonight’s Veto winner removes either Joey or Kandi from the block then Tamar could be put up as a replacement nominee by Tom. How will the Veto competition play out, and who will be the third houseguest evicted? Let’s go!

8:03 p.m. — Tamar calls Tom a “fool” for putting up Joey and Kandi because he thought that one of them had the Power of the Publicist, when really it was she who won. Tom admits he’s “confused” that no one stood up at the nominations ceremony to announce they have the power. He then adds that he’s considering nominating Ricky Williams as a backdoor plan.

8:06 p.m. — Ricky suggests to Tom and Kato that Tamar may have the power, so “Sherlock Tom” says he’s going to do an investigation. Natalie Eva Marie and Lolo Jones confirm that they don’t have the power, and then Lolo has an emotional outburst accusing Tom of not trusting her. Tom manages to calm her down, then tells the girls he’s worried that Ricky has the power and reveals his backdoor plan.

SEE ‘Celebrity Big Brother’ spoiler: Head of Household for round 4 is …

8:12 p.m. — In the Veto competition, the objective is to make three field goals over a cutout lineman after spinning around in circles 15 times. Tamar hosts the challenge while Lolo, Joey, Tom, Kandi, Natalie and Dina Lohan are the six competitors.

8:15 p.m. — By random draw, Lolo gets to challenge someone first and she picks Dina because she’s not a part of her alliance. Dina is so dizzy that she can’t even make it to the football before the lineman pops up! Lolo wins and knocks out Dina. Joey is next up and he chooses to battle against Tom. Joey says that he wants to win because he believes that he is Tom’s true target, but then he’s eliminated. Kandi is next and she chooses Tom, saying that he should be dizzy and tired since he just battled. Unfortunately, her plan backfires as Tom kicks all three field goals in a row.

8:20 p.m. — Tom begs Natalie to not pick him, but she does anyway. “Are they trying to knock me out of this competition?” Tom wonders. Natalie confirms that she doesn’t want Tom to have “all this power.” Natalie’s plan works as she kicks her third field goal, eliminating Tom. That means BFFs Natalie and Lolo are both in the finals, so does it really matter who wins at this point? Yawn. Oh yeah, the winner is Natalie.

8:27 p.m. — It’s now time for the Veto meeting. Natalie has a big decision to make: will she keep the noms the same and betray Tom, or will she use the Veto so that Tom can backdoor Ricky? “I have decided NOT use the Power of Veto,” Natalie declares, adding that she wants to “respect the Head of Household.” Ha! Natalie later says that Tom and Kato showed their “true colors” by trying to backdoor Ricky, essentially ending the alliance.

8:29 p.m. — Tom praises Natalie’s decision in the kitchen, but it’s all for show because he clearly knows he was just betrayed. When the foursome later meets up in the HOH room, Natalie “plays dumb” and says that she didn’t know what to do since Tom never came to her to discuss options. After the girls leave, Tom tells Kato that he no longer trusts Lolo, Natalie and Ricky. RIP Team Fun.

8:36 p.m. — Joey calls the house a “ghost town,” saying that Tom has been acting weird lately. He tells Tamar, Natalie and Lolo that since none of them trust Tom anymore, he should go home next week. It’s a smart move on Joey’s part, since Kandi doesn’t seem to be playing the game at all. Will the girls now decide to save Joey so that he can help them get Tom out?

8:38 p.m. — Kato is “frustrated” because he feels he’s been scammed. While the girls are in the bathroom he tells them that he’s going to win the next Head of Household, essentially threatening them. The next morning Lolo and Kato have a screaming fight in the kitchen. Kato asks the girls if they’ve ever taking an acting class, while Lolo accuses the boys of controlling the house. “Fun, fun, fun!” Lolo yells.

8:46 p.m. — Julie instructs the houseguests that it’s time for the live vote and eviction. Kandi says that she wants to stay and continue playing the game. Joey tells his fellow players that if he gets eliminated he’ll take it as the ultimate compliment. Let’s get this live vote started!

8:55 p.m. — Joey “hugs it out” with Julie as she says the infamous “Whoa” catchphrase. Joey admits that he didn’t have a lot of time to watch the show beforehand but that it was still an amazing ride. Apparently the house thought that Jonathan, Ryan and Joey were a powerful threesome and so that’s why they were all evicted one after the other. Julie brings up the moment when Joey turned down an alliance with Lolo, and he does a funny impression of the Olympian’s emotional outbursts. Finally, Joey correctly predicts that the Patriots and the Rams are in tomorrow’s Super Bowl.