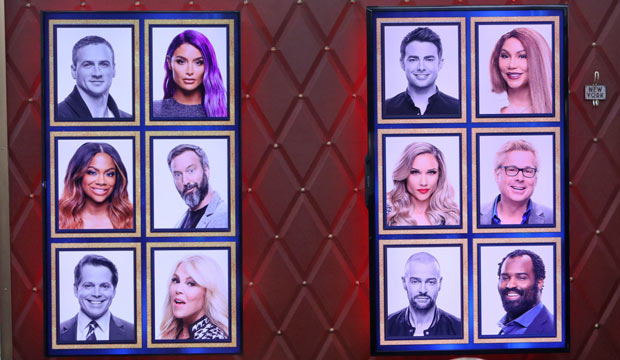 After this weekend’s eviction of Joey Lawrence from “Celebrity Big Brother,” only eight players still remained in the house: Natalie Eva Marie, Tamar Braxton, Kandi Burruss, Tom Green, Lolo Jones, Kato Kaelin, Dina Lohan and Ricky Williams. Monday’s jam-packed episode promised to shake things up as there was a Head of Household competition, a Veto challenge and another live eviction. So how did it all play out, and who had a one-on-one interview with Julie Chen Moonves at the end of the hour?

Below, check out our minute-by-minute “Celebrity Big Brother” recap of Season 2, Episode 9 to find out what happened Monday, February 4 at 9/8c. Then be sure to sound off in the comments section about your favorite houseguests on CBS’s reality TV show, who annoys you the most, and who you think will ultimately join the “Big Brother” winners list. Keep refreshing/reloading this live blog for the most recent updates.

SEE‘Celebrity Big Brother’ spoiler: Head of Household for round 4 is …

9:00 p.m. — “Previously on ‘Celebrity Big Brother’!” In Saturday’s episode, Lolo and Natalie didn’t like Tom and Kato’s plan of backdooring Ricky because they thought he won the Power of the Publicist, so the girls plotted to win the Veto and keep the nominations the same. After Natalie prevailed at the Veto competition she stuck to her word, essentially ending the Team Fun alliance. Joey was later evicted by a unanimous 6-0 vote over Kandi. Who will follow Joey out the door tonight?

9:10 p.m. – The vote to evict Joey may have been unanimous, but this house is far from united. Tamar feels like she’s just a number for her main alliance so she wanted to keep Kandi around as another outsider. Natalie, Lolo and Ricky are in the bathroom discussing how Tamar caused them to swing the vote in Kandi’s favor. Tamar told them she didn’t feel comfortable with Kandi leaving, so at the last minute they all switched their vote to Joey. Then, Natalie pulls Tamar aside and tells her to check her girl, because she’s being too “lovey dovey” with Tom and Kato. Kandi tells Tamar that if Tom or Kato go, they’ll never get Natalie, Lolo and Ricky out. The power struggle is intensifying as numbers begin to dwindle.

9:20 p.m. – It’s time for the HOH competition! As outgoing HOH, Tom is not eligible to compete. The others are competing “Picture Imperfect,” and it’s all about trying to spot something wrong with “Big Brother’s” favorite magazine covers. Two at a time, they will face off in observing three magazine covers. They have to buzz in once they spot the magazine that has a mistake, eliminating the other player. First up is Ricky vs. Tamar. Ricky buzzed in first, but he had the wrong answer and was eliminated. Next up was Kato vs. Kandi. Kato buzzes in first with the correct answer, eliminating Kandi. Next, Lolo defeated Natalie and then Kato eliminated Dina. With two rounds left, Tamar eliminated Lolo and was left to take on Kato for the crown. Tamar buzzes in first with the correct answer and becomes the new HOH! She will not even have to use her Power of the Publicist power now.

9:25 p.m – We quickly move to the Nomination Ceremony and Tamar put Tom and Kato on the block saying it was not personal, but a game. Kato and Tom are big threats. That being said, Tamar does know she needs to get rid of her roommates as well if she wants to make it to the end. Will she attempt a backdoor? Kandi, Dina and Tamar in the backyard and Kandi asks what Tamar will do if Kato or Tom wins the Veto? Kandi suggests putting up Natalie because she’s likable and knows the game. Kandi, Dina and Tom or Kato would vote to get rid of Natalie and pull of a beautiful blindside. But how will the Veto play out?

9:30 p.m. – Time for the live Power of Veto competition! Legendary comedian Gallagher takes the stage for a performance that the competitors must pay close attention to. True to form, Gallagher begins smashing food that splatters all over the houseguests. Competing are Tamar, Tom, Kato, Kandi, Dina and Lolo. Who will win the Power of Veto? And will the use it to remove Tom or Kato from the block?

9:40 p.m. – Hopefully the competitors in tonight’s Veto competition were paying close attention to the details in Gallagher’s show because they will need a good memory to win the Power of Veto. In “Smashing Success,” Julie will ask the houseguests a series of True or False questions based on the show they just saw. For every correct answer the competitors will get one point. The player with the most points after seven rounds will be the winner. After seven questions, Lolo won the Power of Veto with a perfect score! The ladies celebrate and it looks like Tom or Kato will likely be sent packing.

9:45 p.m. – It’s now time for the Veto ceremony. Not surprisingly, Lolo has chosen to NOT use the Power of Veto and keep the nominations the same. Julie then reveals that the mystery power given to one of the houseguests was not used and has now expired. Obviously as HOH, Tamar didn’t need to use the Power, but I’m not sure she ever confirmed to anyone that she had won it.

9:55 p.m. – It’s time for the live vote and eviction! Believing he’s likely the next to go, Tom basically gave a goodbye speech rather than pleading to stay. Kato did the same and this is all just way to nice for me. Throw daggers! Make up lies and try to ruin someone’s game on your way out the door! After the vote, it was revealed that Kato has been evicted in a unanimous vote. Wow! I thought Tom would be the one sent packing.

9:59 p.m. – That was an action-packed Monday. Who will be the next houseguest to rise to power and win the HOH? Who will be nominated for eviction? And can Tom turn his game around? Find out Thursday on “Celebrity Big Brother.”

SEE ‘Celebrity Big Brother’ spoiler: Head of Household for round 5 is …