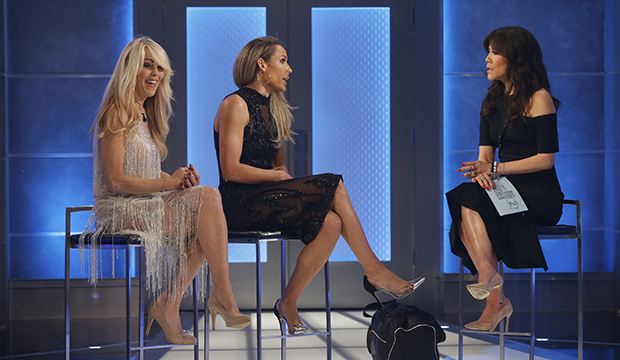 So if you were giving Lolo Jones the benefit of the doubt and thought her anger over being evicted in third place by Ricky Williams on Wednesday’s “Celebrity Big Brother” finale would subside after she slept on it, well, you are dead wrong. Reunited with her phone, Lolo doubled down on her Ricky hate in the comments of one of her Instagram posts on Thursday.

“I was loyal to Ricky … and Nat [Eva Marie] the entire game. I saved Ricky multiple times from being back doored,” she wrote. “In the end he was not loyal to me, who was beyond loyal to him. He’s a false prophet. He spews wisdom and contradicts his own advice. Example: the whole season he said no deals … then he gets mad I didn’t take his one sided deal bc I wanted to honor everyone in the final. I’ve lose a lot in my Career. A TON. I’m not mad I lost, I am mad Ricky posed as a genuine friend.” 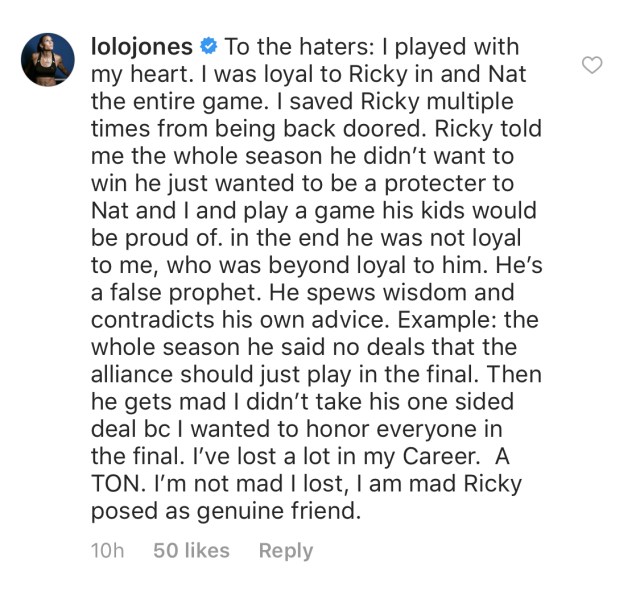 So it sounds like she’s sticking to what she told Julie Chen Moonves in her exit interview: “Ricky always said in this game, to play this game so you have friends afterwards, and the move he just made, I don’t know if I would want to continue the friendship.”

Sigh. Someone tell Lolo that this is just a game, and the game involves strategizing and manipulation. It’s not like there was any way the entire Bedroom Alliance was making the final two. Ricky chose Tamar Braxton, who made a final two with him. And lest Lolo forget, she had her own final two with Natalie. So if it were her, Ricky and Natalie remaining, and Lolo took Nat to the final, would Ricky have gotten this incensed about it? Nope.

Ricky, who lost 9-0 to Tamar, is not even that upset with Lolo’s reaction, telling Entertainment Weekly, “Sleeping on the other side of the room from Lolo I got a chance to get to know her, and I’m not surprised by it” — which is code for “Dude, you have no idea the sh– I dealt with” — “I really respect her and I think she’s a fierce and a wonderful competitor. And hopefully, she changes her mind. But if not, I have to respect that.”

Plus, if we’re going to talk about betrayal, Lolo betrayed Ryan Lochte because she was jealous he became friends with Jonathan Bennett (and blamed it on him not honoring their unspoken Olympic bond), and Tom Green and Kato Kaelin, when Tomato were the first ones who wanted to target Ricky, who’s now apparently Lolo’s personal Judas.

Also, why does Lolo think she was entitled to a final two spot when she wouldn’t even take Ricky’s deal? Ricky didn’t play to help you win after you turned him down. Shocker. The former running back did clarify to EW that his offer to Lolo was just a case of him covering his bases because Tamar was always his No. 1 (smart). Had Lolo accepted, Ricky said he wouldn’t have tried to win the final HOH, which he did, over Tamar in a tiebreaker; he would’ve let Lolo and Tamar duke it for the win so one of them would take him. “So either way, even in that scenario, Tamar beat Lolo in the in the final HOH,” he said. “So it would have been the same ending, except I wouldn’t have won on the final HOH. So, I really liked this ending.”

And lest you think Lolo only has beef with Ricky. She also claimed in another comment that we didn’t see the “real Tom Green” because YouTube scrubbed videos that would expose him. Hmm, if only there was a way fans could’ve watched what was going on in the house 24/7. Oh, wait.