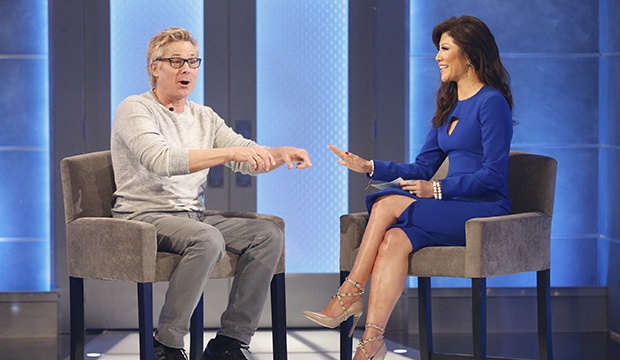 Tomato got cut in half on Monday’s “Celebrity Big Brother” when Kato Kaelin got evicted by a 5-0 vote over Tom Green, much to their shock, as both were expecting Tom to go.

“Completely surprised. [When Julie Chen Moonves said,] ‘Kato, you’re evicted.’ … I thought, ‘Typo. Can we check that again, please?’ But yeah, I actually was really surprised. I thought Dina Lohan, 100 percent, was going to vote for me,” Kato told Entertainment Tonight. “No hard feelings. I think that’ was probably really tough on her because I knew they were thinking there was a showmance [between Dina and me], but there wasn’t. She’d laugh at my jokes, so you bet I’m going to go to that person.”

Kato said he initially had an inkling he might be the getting the boot because he heard the other side of the house refer to him as a “great game player,” but Tom was convinced that the unanimous vote would be 5-0 for him. “I was 5-0, but the good news is Tom owes me a beer,” Kato said. “If he wins the whole thing, he’s buying me a beer plant!”

SEE ‘Celebrity Big Brother 2’ spoilers: The HOH for Round 5 is…

The fortunes for Team Tomato changed very quickly after they won four comps in a row. The introduction of the Power of the Publicist twist made Tom paranoid and they made the mistake of telling Lolo Jones and Natalie Eva Marie their plan to backdoor Ricky Williams when there were signs that the three of them, along with Tamar Braxton, might be forming their own side alliance. “Four people living in the same room. We knew there had to be some planning, and the girls, they got us. They got us,” Kato said.

But the nail in Tomato’s coffin was failing to win not one but two comps when it was down to the wire. “Twice we blew it,” he said. “We had a window of opportunity. … We needed to backdoor Ricky.” Kato missed the final question on the Photoshop HOH, losing to Tamar, even though, as he explains, he “knew in my head, ‘They haven’t used [the answer] A yet. Just go with your gut, go with your gut.’ I didn’t.” And Tom missed the final kick in the football Veto the previous week that Natalie won. “Right there, [if he had won that], backdoor Ricky, everything changes in the game,” Kato said.

SEE Joey Lawrence is very, very happy to be away from his bickering ‘Celebrity Big Brother’ houseguests: ‘They suck up all the energy’

But like a true bromance, Kato has faith that Tom can still win it all even with the odds against him inside the house. “If Tom actually makes a smart move and somehow convinces two of the girls, he can get it going,” he said. “He has to win HOH tonight and the game is on.” (Click here to find out who won HOH.)