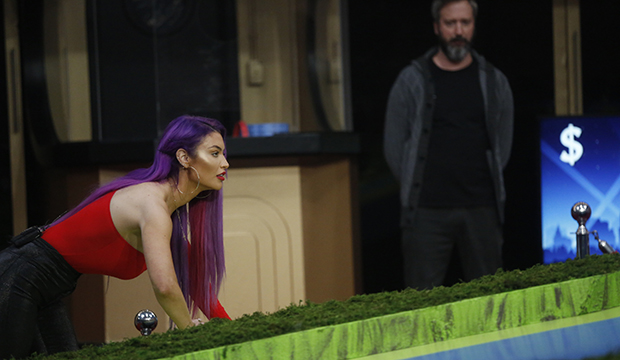 So no one told you “Celebrity Big Brother” is going to be like “Friends.” Well, it is, at least Thursday on the live feeds, when chaos reigned again even with nothing actually changing. It was wild, and it reminded us of the Hall of Fame “Friends” episode “The One Where Everybody Finds Out.”

If you’re one of the two people unfamiliar with that episode, that’s the one where Rachel (Jennifer Aniston) and Phoebe (Lisa Kudrow), having found out about Chandler (Matthew Perry) and Monica’s (Courteney Cox) secret romance, decide to mess with the lovebirds instead of confronting them about their relationship. And once Mondler realize that, they decide to mess with Rachel and Phoebe, giving us this iconic line:

Well, that’s exactly what happened in the house Thursday. After Natalie Eva Marie opted not to use the Veto, leaving Joey Lawrence and Kandi Burruss on the block, Tom Green and Kato Kaelin were surprised since they, Natalie and Lolo Jones had agreed to take down Joey to backdoor Ricky Williams. Team Tomato and the women did not talk at all before the Veto ceremony, which is hilarious, each side saying, “I’ll let him/her come to me,” but Natalie’s “explanation” is that she didn’t want to backdoor her own alliance member, Ricky.

To help sell this story and try to cover up the fact that he has a new alliance with Lolo, Natalie, Joey and Tamar Braxton following Tom’s freakout over the Power of the Publicist, Ricky acted shocked that the Veto wasn’t used in front of Tom and Kato, asking if the plan had changed. Tom and Kato insisted it hadn’t and said that Natalie never talked to either of them. Ricky then said he now wants to evict Kandi, not Joey, the original target, because, he says, Joey is a lone wolf in the house.

All (not) fun alliance members eventually talked, with Natalie claiming she didn’t know what to do because Tom had changed his mind a billion times since the power was announced. The women then said they’d like to evict Kandi as well since Kato had mentioned he wanted to work with Joey the following week. They also floated the idea that Dina Lohan, one of Tom and Kato’s pals, might have the power (no one knows Tamar has it still).

It was a ton of blowing smoke up each other’s asses, and none really bought what the other side was saying. Once Lolo, Natalie and Ricky left the HOH room, Tom and Kato basically talked about how fake they were and what bad actors they are. “It’s like the Academy Award goes to all three of them. That was a fun performance we just watched. They all had their little story,” Tom said.

“They showed their cards with one thing they said to me: ‘I think Dina has it,'” Kato replied. “They are trying to out the people that would be on our side.”

Tom was so annoyed that he wanted to end their final five alliance publicly with a pots and pans performance (paging Josh!), but Kato dismissed it because then they’d be down in numbers. So they decided to try to pull Joey in, telling him they’d save him if he works with them, even though they know Ricky & Co. have probably already gotten to Joey since they’d said they wanted to evict Kandi. And then Tom and Kato literally channeled “Friends”:

Kato: Ricky is a bad actor, but I think he is smart enough to know that we know.

Tom: Of course he knows we know.

After an HOH party, Tom and Kato spilled the beans to Joey that they had wanted to backdoor Ricky and now need Joey to work with them. Joey feigned surprise, but I guess since he’s a professional actor, Tom and Kato bought it. Kato then tried to clue Dina in on everything, but she was tipsy from the party, and the whole thing devolved into an argument with Kandi about Dina voting to evict Kandi in Week 1. Dina then told the other side what had happened and Kato eavesdropped outside the room. Ricky implored his crew to “be cool until we turn the key.”

Tom and Kato eventually talked Dina into being on their side and evicting Kandi. “They think we are voting Joey,” Kato said. They don’t know that we are not.” Well, jokes on you! Joey ended the night by telling Lolo, Natalie and Tamar about his conversation earlier with Kato and Tom, and vowed that he is siding with the women and Ricky. “What I told you is true,” he said. “I want it to be the best energy in the house the last week.”

SEE ‘Celebrity Big Brother 2’ spoilers: The Power of the Publicist twist turned the house upside down

So you see, wild. The plan didn’t change that much, since Joey was going to be saved after Ricky, Lolo, Natalie, Tamar and Joey formed their little side alliance on Wednesday. But now Joey has Kato and Tom wanting to keep him too. What a turnaround for this dude after being a dead man walking as recently as Tuesday. The best part of this season is how almost everyone is a blabbermouth, so word travels fast as to who’s doing or thinking what. Ricky is an expert at this since that’s his M.O., working all sides and to plant seeds of doubt. But since Tom’s meltdown over the power, Ricky’s been firmly entrenched with the ladies and Joey.

The most hilarious thing is how Tom, Kato, Lolo, Natalie and Ricky are all acting like they’re still loyal to their bogus alliance. Tom is right; they’re all bad actors. They all know the alliance is done, and they know the other side knows or at the very least suspects something’s up, but they’re going to be all about the final five until they get through this eviction. It’s basically a ticking time bomb. To be truly like “Friends,” it’ll all come out in the open eventually and everyone will find out. And then maybe all hell breaks loose. At least Tom and Kato are not blind to their fate. “We are dead,” Kato said. “I can feel it.”