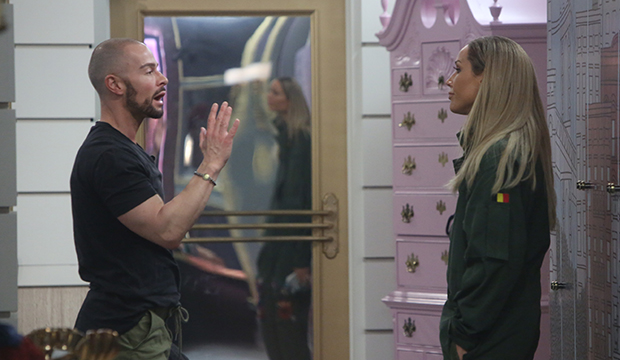 Well, we spoke too soon. Right after we lamented that we’re probably in for another boring week with a Tom Green HOH and a Joey Lawrence target, the sh– hit the fan on the “Celebrity Big Brother” live feeds. Tom nominated Joey and Kandi Burruss for eviction on Tuesday, and the houseguests were informed of the Power of the Publicist twist, but weren’t told what it entailed — just that it would get you out of a “sticky” situation. One of them got it — chances are it’s Tamar Braxton since she was the top trending one on Monday night — and hasn’t told anyone yet, and it’s driving Tom absolutely insane.

Seriously. He spent the better part of six hours trying to flush it out of people Tuesday night. Everyone’s denied it, and he just cannot deal. Everyone not named Tamar and Ricky Williams believe it’s one of them who has it because Tamar was quiet and didn’t speak to anyone after they were all told, and Ricky is shady Ricky. Tom tried to broach Tamar about it by asking her to get it out of Kandi, which Tamar took as a threat that Tom would put Tamar up if she didn’t oblige, so she flipped out on him.

At this point, Tom’s goal isn’t even to evict Joey anymore; he just wants to find out who has the power and get that person out. He then decided that Ricky has it and wants to target him, which did not please Lolo Jones and Natalie Eva Marie, since the four of them have a final five with Ricky. Lolo called Tom out on his paranoia, which made Tom think they ladies are secretly working with Ricky, but they apologized to each other. Kato Kaelin, who’s managed to talk Tom out of changing his mind this entire time, doesn’t know for sure if Ricky is playing them, so he didn’t think it’s a good idea to go after him.

SEE ‘Celebrity Big Brother 2’ spoilers: Who won the Power of the Publicist

But Kato quickly changed his mind about Ricky after Ricky went upstairs and found the group after his DR session, believing that DR told him to crash the convo. Ricky is super chill about the power, adopting an “It is what it is” philosophy about it, which just stokes Tom’s suspicion even more. But Ricky did read him to filth: “It seems like you are getting obsessed with who has the power and it’s throwing you off of the game plan. It seems like that has consumed you.”

Later, while talking to Lolo, Natalie and Tamar, Ricky laid it down even more. “His obsession is clouding his vision,” he said. “I say, ‘You want the information? For what reason?’ He cant even give me a reason. It turned into an obsession. The paranoia it has created has already done more damage than I think the power can ever do.”

There were lots more interrogation and talking in circles — Tom said at one point, “I would hate to be the editor that has to make sense out of this” — culminating with Tom and Kato deciding that they will target Ricky. The Veto would be used on Joey and Tom would nominate Ricky, telling him that he thinks he has the power, and even if Ricky doesn’t have it, they would vote him out.

Meanwhile, Lolo, Natalie and Ricky are solidifying their alliance to make sure no one gets voted off if one of them, especially Ricky, gets backdoored. “If one of us wins [Veto] and we don’t use it, no one gets backdoored. Everything stays temporarily stable,” Ricky said. “Even if he does backdoor one of us, his expectation is the person uses the power. If he does it and we don’t use the power, we don’t have to vote one of us off.”

So that was an adventure. Who would’ve guessed this would turn Tom into a raging lunatic? When you’ve got Tamar saying she told you 13,000 times to calm down, you know you’re doing something wrong. Tom has been one of the few houseguests to consider things from all sides, even if Kato ultimately shuts him down in the end, but it seems like he’s unable to adapt when things don’t go according to plan or he doesn’t have all the information he wants. Newsflash, Tom: You’ll never have all the information in the house. And no one owes you any information.

The hilarious thing is that he and Kato were sitting pretty, dominating the game with a final four with Lolo and Natalie, and now he just made himself a massive target with this meltdown. His obsession and paranoia have driven Lolo and Natalie towards working with Ricky, and Ricky even floated the idea of nominating Tom down the line if the women agree to it. He just screwed up his own game for no reason.

We have to give props to the power holder for keeping it under the wraps. On the regular seasons, these things come out in the open after a few minutes because the person always tell their alliance member, so the paranoia meter is not as high. Also, those regular folks can deal with a freakin’ twist better than Tom Green can apparently. But this was the shakeup we needed in the house after two straightforward evictions and a Mooch twist that was lame as hell.