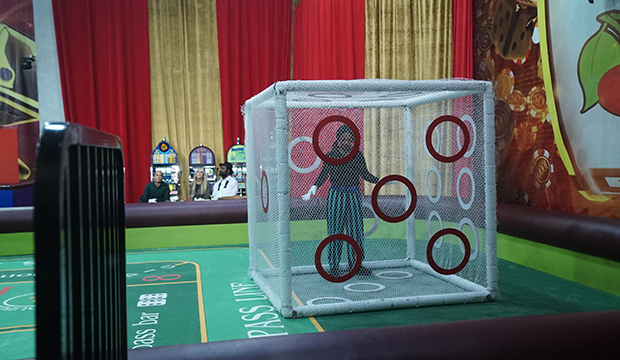 We’ve got to hand it to Tom Green. The man is a mad genius. First, he figured out, like, every permutation for the dice comp and crushed it on Thursday’s episode of “Celebrity Big Brother.” Then he actually made good on that “surprise” move he had promised on the live feeds at the Veto ceremony: He saved Ricky Williams and put up Lolo Jones next to Natalie Eva Marie.

Well play, Tom, well played. Absolutely no one was expecting him to save Ricky since he’s been gunning for him since his last HOH. Even Ricky claimed he was ready to throw in the towel because he knew Tom wanted him out. But Kandi Burruss and Dina Lohan alerted Tom to Natalie being the bigger threat, but it seemed like Tom was ready to use the Veto on Natalie to ensure he get Ricky out.

This curveball threw everyone for a loop. Tamar Braxton is annoyed even though she is the sole person sitting pretty with both sides of the house, but Tamar is going to Tamar and has now seemingly chosen her side with RiNaLo (if she’s still trying to protect Kandi, she’s going way over the top). Kandi and Dina obviously are going to vote Natalie out, but Ricky and Tamar are torn over who to keep and if they should try to pull an extra vote (Dina has been telling them she isn’t sure who she’s voting for yet). Ricky and Tamar have even debated each of them giving a vote to Lolo and Natalie to be fair (lol ok). But even if they both vote to evict Lolo, it will be 2-2 and Tom would break it and evict Natalie.

SEE ‘Celebrity Big Brother 2’ spoilers: Did Round 5 Power of Veto change the nominees?

Lolo and Natalie don’t know what to do because they don’t want to campaign against each other. Natalie offers to get evicted because she’s married and has a life outside of the house, but Lolo doesn’t. “This money is amazing and would help out a bunch,” she told Lolo. “However, you’re in a much tougher position than I am. I’m married. You are walking into an empty house. I’m not saying that to be rude. It’s honest.” She genuinely meant this, but if you just read it, it sounds shady as hell.

Meanwhile, Tom, who believes Lolo would work with his side once Natalie goes, is worried Kandi is a mole because she’s been blabbing to Tamar and might actually vote to evict Lolo. “This game is expect the unexpected. The unexpected here is Kandi votes with Ricky and Tamar,” Tom said. “She is voting with us. Trust me,” Dina said.

There goes Tom’s paranoia again. Kandi’s been as laser-focused on Natalie as Tom has been on Ricky. Chill, dude. It looks like Natalie will be going on Friday, which sets us up for a very interesting double eviction that none of them is expecting. Tom knows he’ll be targeted, and neither Ricky nor Lolo have any interest in honoring their “deals” to keep Tom safe if they win HOH.

“Whoever wins HOH, put the f—ing hammer down,” Natalie said. “Tom and Dina. Like you said, Ricky, if Tom wins the veto, deuces Kandi.”

SEE ‘Celebrity Big Brother 2’ spoilers: Get ready for a ‘surprise’ move at the Veto ceremony

“I ain’t got a problem putting up Kandi and Tom,” Tamar said.

Tom needs Dina or Kandi to win HOH otherwise he needs to win the Veto, which he’s pretty confident in winning. “I’m going to win every competition for the rest of the game,” he told Dina. I mean, after that dice performance, I wouldn’t doubt him (when eligible, of course).

But we have to thank Tom for coming through with an actual surprise that caused even more drama and forced people to choose sides. This is going sooooo much better than his last HOH.