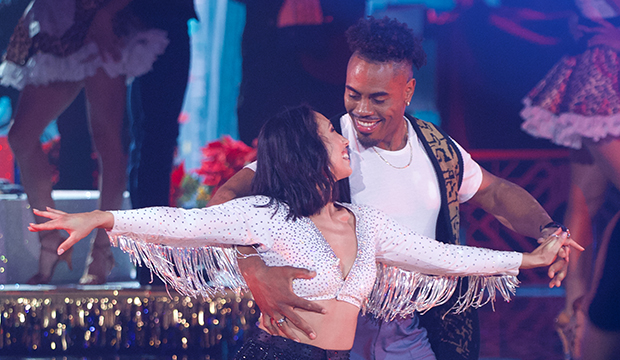 “Dancing with the Stars” overhauled its voting system this season, and while there’s some good things about it, there’s one aspect that Cheryl Burke doesn’t like very much.

“I don’t think it’s fair for the West Coast,” Burke told “TV Insider” of the live voting change. Viewers can now only vote during the live broadcasts on Mondays, which means half the country is voting blind without having seen the dances. Voting also closes just minutes after the final dance so the bottom two can be revealed for the judges to decide who to send home — a change that Burke does like as it potentially prevents shocking eliminations of good dancers.

The two-time champ, who performed an exhibition cha-cha with former champ Rashad Jennings on Monday after Ray Lewis‘ toe injury forced them to withdraw, thinks the ideal solution is to revive the Tuesday night results show. ABC eliminated the results show starting with Season 17 in 2013 to open up more real estate on its schedule as ratings for the show started to fall. But a results show means fans in the whole country will have time to watch — or catch up — and vote overnight, which was the old system.

“Also, we have Monday Night Football [competing against us],” Burke noted of “Dancing’s” primetime rival. “Last week, for example, I think, football was airing in [Ray’s] region.”

There’s one more change — or rather return to its old ways — that Burke would like to see: more pre-premiere rehearsal time to prevent injuries. The couples now only have three weeks to prep before the season starts, half the time they used to be afforded back in the day.

“I do think they need to give us more time for training,” Burke said. “We used to do six weeks of training [before the competition started]. I’m not saying it should be that, but now we have [only] three weeks. We need to go back to having four or five weeks because your body’s in shock. [Being on this show] is no joke. This is full-on, seven days a week. Your body is not used to the way it’s moving. We need to avoid injuries.”