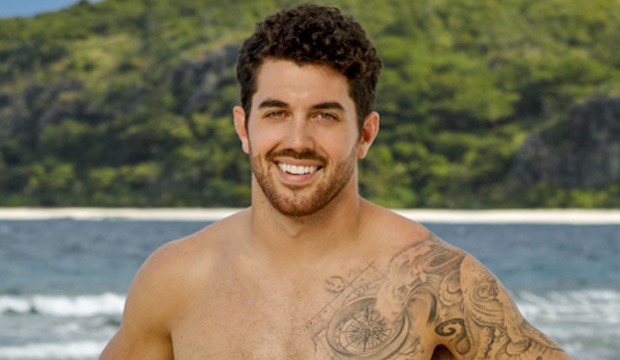 “I just got lied to my face,” declared a depressed Chris Underwood after being the third person voted out of “Survivor: Edge of Extinction.” This South Carolina sales manager was eliminated by a 5-2 vote over Kelley Wentworth in Episode 3 when Kelley’s buddy Dan “Wardog” DaSilva learned that Chris was coming after her. After Jeff Probst snuffed his torch, Chris then made the decision to join Reem Daly and Keith Sowell at Extinction Island, where he’ll soon have the opportunity to return to the game. Scroll down to read more of Chris’ “Survivor” Season 38 exit interview.

“Tomorrow it’s gonna be motivation and re-focus,” Chris promised before adding, “Tonight it’s painful, like something in my stomach hurts. I didn’t see the blindside coming, but this is a blindside inside of a blindside — it’s like a redeeming blindside.” Chris went into tribal council believing that Kelley would be eliminated, not knowing about Wardog’s plan to betray him for trying to oust Kelley.

Chris later said, “I’ve been given a second chance and I’m gonna make the most of it. Screw those guys, you know? I’m coming back for you.” So far little is known about how many of the Extinction Island inhabitants will be allowed to return to the game, but if it there’s any kind of physical challenge on the horizon then Chris would seem to have a leg up on both Reem and Keith.

SEE‘Survivor’ deleted scene: Gavin has a death wish against Joe’s man-bun — ‘I’m gonna suck out all of its power’ [WATCH]

The original plan to eliminate Kelley was actually thought up by David Wright and Rick Devens, and when they informed Chris about the blindside they warned him not to bring in Wardog. Unfortunately, Chris didn’t listen to them. When Chris told Wardog that he wanted to send home Kelley, Wardog flipped the tables on Chris and made sure that it was his name that was written down instead.

Amazingly, all of this Chris-Wardog-Kelley drama meant that the easy boot, Wendy Diaz, survived yet another day. Wendy was a physical liability because of her hurt ankle, but she was also a social annoyance because of her refusal to let her Manu tribe members kill the chickens they won in the reward challenge. In fact, Wendy was so opposed to the chickens dying that she stole the flint to prevent her teammates from starting a fire.

'Survivor 41' episode 4 recap: Who was voted out in 'They Hate Me 'Cause They Ain't Me'? [UPDATING LIVE…