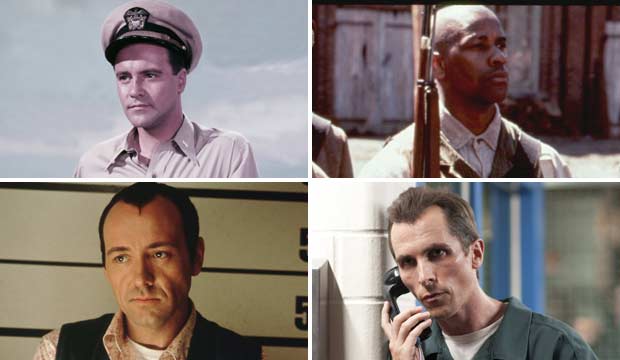 What do four disparate entertainers such as Jack Lemmon, Denzel Washington, Kevin Spacey and Robert De Niro have in common besides being actors. The quartet won a supporting Academy Award before claiming gold for a lead.  Three-time nominee Christian Bale, whose uncanny transformation into Vice President Dick Cheney is the most acclaimed element of  Adam McKay‘s satirical biopic “Vice,” could join that club if he wins a companion Academy Award to go with his supporting statuette for his crack-addicted boxer in 2010’s “The Fighter.” He previously was nominated for Best Actor for his con man in 2013’s “American Hustle” and for his supporting part as an anti-social whiz at numbers crunching in  2015’s “The Big Short,” also directed by McKay.

Let’s look at how the foursome above went about doubling up on Oscars:

*Lemmon, an eight-time Oscar nominee, first won for his comic-relief role as the rebellious Ensign Pulver in the 1955 Navy-themed dramedy,“Mr. Roberts,” directed by John Ford with Henry Fonda as  the title character. He went on to be honored for his lead in a mostly forgotten 1973 drama, “Save the Tiger,” as an apparel company exec who struggles with his conscience as he considers setting his warehouse on fire to collect the insurance money.

*Washington, a nine-time Oscar nominee – all for acting save for one as a producer of the 2016 Best Picture contender “Fences” – captured his supporting win for the 1989 Civil War drama “Glory” as Private Silas Tripp, who serves in one of the first all-black regiments in the Union Army led by Matthew Broderick‘s white commanding officer. Washington would then make history as the second black actor after Sidney Poitier in 1963’s “Lilies of the Field” to win an Academy Award for Best Actor in a rare villainous role as a corrupt narcotics officer in 2001’s “Training Day.”

*Spacey, long before he faced alleged sexual misconduct charges, was primarily a character actor who established himself as a rising star in flashy parts on the ‘80s TV series “Wiseguy” and as a twisted serial killer in 1995’s “Seven.” He earned his supporting Academy Award thanks to a juicy role that same year as the mysterious criminal Verbal Kint in Bryan Singer’s neo-noir “The Usual Suspects” that same year. Soon he was elevated to lead status as with his Oscar in a suburban family man and ad exec who decide to eschew social norms after being fired from his job in 1999’s “American Beauty,” directed by Sam Mendes.

*As for De Niro, he won for his first-ever nomination in the role of the young Vito Corleone in Francis Ford Coppola‘s “The Godfather Part II,” a part that earned Marlon Brando a lead Oscar in the 1974 original — the only time the same character was ever rewarded twice. He spoke primarily Italian in his scenes. De Niro would get his lead  trophy for 1980’s “Raging Bull,” as boxer Jake LaMotta. He would pack on 60 pounds to play the elder version of his character in Martin Scorsese‘s biopic.

Sometimes it helps to start with a smaller triumph and build to a major one. The 44-year-old Bale’s win for David O. Russell’s “The Fighter,” which required a 30-pound weight loss, bolstered his mainstream cred beyond his Batman franchise. A win for “Vice,” which required a 40-pound weight gain, would re-affirm his status as one of the most versatile and talented actors of his generation.His win at the Golden Globes is an encouraging sign.

For now, the combined Oscar odds based on picks by Experts, Editors and Users on the Gold Derby site puts Bale in second place for Best Actor, right below Bradley Cooper in “A Star Is Born” at No. 1. He is similarly at No. 2 in the combined Screen Actors Guild predictions below Cooper. However, he was a rare two-time winner at the Critics’ Choice Awards as Best Actor in a Comedy and Best Actor in a film. This could prove to be a real nail-biter.