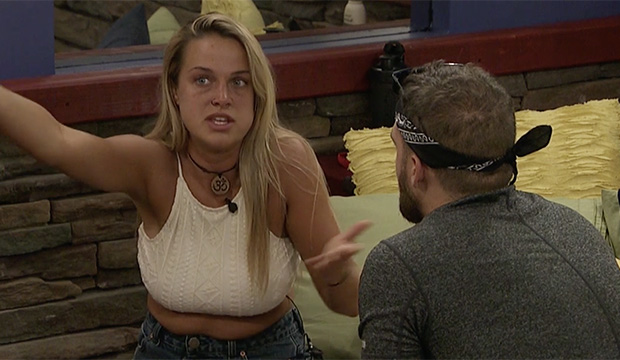 Just two weeks after “Big Brother’s” Christie Murphy was forced to play in the America’s Field Trip competition which put her up on the block as a third nominee, she’s now nominated thanks to America’s Prankster, aka Nick Maccarone. These back-to-back blows have Christie wondering if “BB21” viewers secretly hate her. “I’m honestly starting to feel like if this is some sort of prank, the prank is on me and America must want me to go home,” she stated during Sunday’s episode.

“My biggest fear is not making my family and my friends proud and not making America proud,” Christie said while tearing up in the Diary Room. “I just feel like I’m being challenged.” Do you want Christie to finally be evicted this week, or would you prefer if her block-mate Nick (who was nominated by Head of Household Holly Allen) was ousted instead? Click here to vote in our poll.

America’s Prankster himself still isn’t sure that the special honor will be enough to save his doomed game this week. “It obviously isn’t fun to be on the block,” Nick told the camera. “But the fact that I was able to pick the person that I thought I had the best chance next to is really good. Sitting next to Christie gives me the best chance of staying in this game. I hope that her whole game just backfires on her and she can walk out the door on Thursday.”

Initially Holly was worried her HOH reign would be threatened by the Prankster twist, but she had no objections to Christie being named the second nominee. “I nominated Nick because he’s one of the strongest competitors in this game in every aspect,” Holly explained. “And also, he has zero loyalty to me. The Prankster put up Christie, which honestly is great, I’m fine with that. If Nick is able to take himself off the block then I’m okay with Christie going home.”

Holly’s showmance partner Jackson Michie was worried he’d go up as the Prankster’s nominee since he’s such a threat, but just because he escaped this round doesn’t mean he’s completely out of the “BB” wilderness. “What scares me is not knowing who the Prankster is, nor being aware of who they would put up if Christie comes off,” Michie reiterated. “So I need nominations to stay the same because I don’t want to be a replacement nominee.” Find out who wins the Veto on Wednesday night.