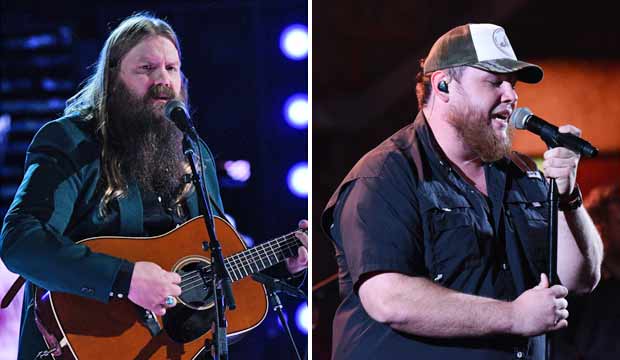 Chris Stapleton has been indomitable as the Country Music Association’s Male Vocalist of the Year since he broke out with his breakthrough solo album “Traveller.” He has been nominated every year since 2015 and has won every single time. He’s the odds-on favorite to win for the fifth time in a row at the 2019 CMAs, but he should watch out for Luke Combs, who is poised for an upset.

As of this writing Stapleton gets leading odds of 11/2 based on the combined predictions of hundreds of Gold Derby users who have given us their forecasts here in our predictions center (you can make your own picks and update them as often as you like before the winners are announced). It certainly doesn’t hurt his chances that he’s also nominated for Entertainer of the Year. The only other Male Vocalist nominee for whom that’s the case is Keith Urban, but he hasn’t won this category since 2006; he didn’t even win it last year when he won Entertainer of the Year.

But Combs is breathing down Stapleton’s neck, currently ranked second in our predictions with 6/1 odds with support from seven of our Top 24 Users, who got the highest scores predicting last year’s CMA winners. He won New Artist of the Year in 2018, and just like Stapleton he has three total nominations in 2019. He’s also up for Song of the Year for “Beautiful Crazy” and Musical Event of the Year for “Brand New Man,” his collaboration with Brooks and Dunn. This year he has also had two songs in the top five on Billboard’s Hot Country Songs chart (“Beer Never Broke My Heart” and “Even Though I’m Leaving”). And he has a new album coming out November 8, just a few days before the CMAs ceremony on November 13.

That means Combs is more current than Stapleton, who is between albums (his last, “From A Room: Volume 2,” was released at the end of 2017). The only new songs he has released in 2019 so far are “Blow,” his collaboration with Ed Sheeran and Bruno Mars, and “The Ballad of the Lonesome Cowboy,” his contribution to the “Toy Story 4” soundtrack written by Randy Newman. So it’s possible voters will take a year off from him and let another hit-maker into the spotlight.

'The Way I See It': From Critics' Choice winner to Oscars?

‘All In: The Fight for Democracy’ co-director Lisa Cortes: Voter suppression is a ‘monster’ that ‘resurfaces’

‘Rebuilding Paradise’ producer Sara Bernstein on charting the aftermath of disaster: ‘What doesn’t leave is the pain that people ...
Must Read
Show Articles