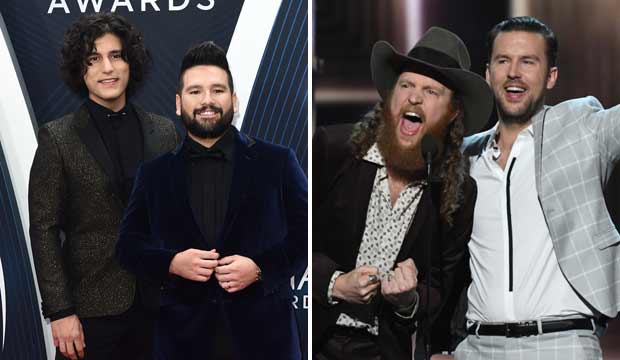 Brothers Osborne are the three-time defending champions for Vocal Duo of the Year at the Country Music Association Awards, but it doesn’t look like they’ll get to four, at least not this year. According to the combined predictions of hundreds of Gold Derby users who have placed their bets here in our predictions center, Dan and Shay are the overwhelming favorites to knock them off their perch.

Dan and Shay are nominated for Vocal Duo for the sixth time in a row, but they’ve lost all five of their previous bids: twice to Florida Georgia Line (2014-2015) and the last three times to Brothers Osborne (2016-2018) However, they’re now the overwhelming favorites with 5/1 odds, and they’re backed by 23 of our Top 24 Users who got the highest scores predicting last year’s CMA winners. So what has changed?

Well, they have three total nominations — four if you count the fact that one half of the group, Dan Smyers, is up for Song of the Year for co-writing their hit “Tequila.” Those four noms are more than any other vocal duo this year, and the fact that they’re the only duo nominated for Album of the Year (for their self-titled third album) makes them look pretty tough to beat.

Brothers Osborne rank second with 13/2 odds. They’re not looking half bad with three nominations of their own — also including Single of the Year for “Burning Man” with Dierks Bentley and Musical Event of the Year for “All My Favorite People” with Maren Morris — but those other noms are as featured artists on other people’s songs, so it looks decidedly like Dan and Shay had the strongest year of any duo.

SEECould the CMAs pick a woman for Entertainer of the Year for the 1st time since Taylor Swift almost a decade ago?

2019 has been a breakthrough for Dan and Shay in general. They won their very first Grammy (Best Country Duo/Group Performance for “Tequila”), their first three Academy of Country Music Awards (including Vocal Duo of the Year), and their first Billboard Music Award (Top Country Duo/Group). That’s a pretty big and pretty sudden windfall for an act that’s been active for five years now, releasing their debut album in 2014.

They can blame it on the alcohol. The aforementioned “Tequila” was released in 2018 and became by far the biggest hit of their career. It was their first number-one hit on the Billboard Hot Country Songs chart, and it has been certified four-times platinum as of this writing. That paved the way for another chart-topper, “Speechless” (currently a CMA nominee for Single of the Year). And this fall they crossed over onto the pop charts by collaborating with Justin Bieber on their latest, “10,000 Hours,” which became their first top-10 hit on the all-genre Billboard Hot 100 singles chart.

So will the dynamic duo continue their winning streak by taking home their first CMA Awards?