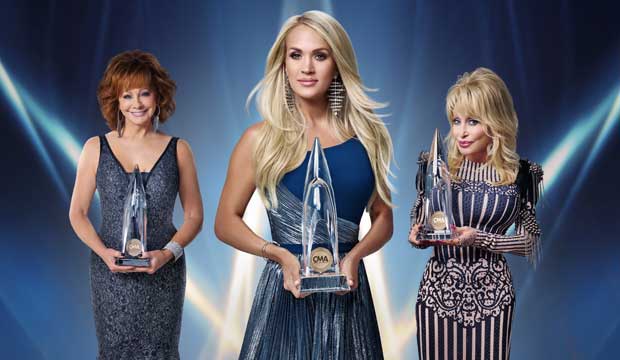 The 53rd Annual Country Music Association Awards were presented on Wednesday night, November 13, during a live telecast on ABC hosted by Carrie Underwood along with country legends Reba McEntire and Dolly Parton. So who were the big winners? Scroll down to see the complete list of winners, updated live as they were announced.

In addition to hosting the show, Underwood was nominated for Entertainer of the Year against Garth Brooks, Keith Urban, Chris Stapleton and Eric Church. But the most nominated artist at the event was Maren Morris, who contended six times including Album of the Year for “Girl” and Single of the Year for the title track.

Two winners were announced the morning before the telecast. Musical Event of the Year went to the record-breaking collaboration “Old Town Road” by Lil Nas X and Billy Ray Cyrus. And Music Video of the Year went to “Rainbow” by Kacey Musgraves, who was in the running for two more awards at the main event: Song of the Year (“Rainbow”) and Female Vocalist of the Year.

Performers at the event included Underwood, McEntire and Parton, who opened the show with a special tribute to the women of country music with Terri Clark, Sara Evans, Crystal Gayle, The Highwomen, Martina McBride, Jennifer Nettles, Tanya Tucker and Gretchen Wilson.

SEELil Nas X is officially a winner at the CMAs! ‘Old Town Road’ announced as early champ ahead of Nov. 13 telecast

Did you think the CMAs got it right this year? See who won below.

ALBUM OF THE YEAR
Award goes to Artist and Producers

SINGLE OF THE YEAR
Award goes to Artist(s), Producer(s), and Mix Engineer

“Some Of It” – Eric Church
Director: Reid Long