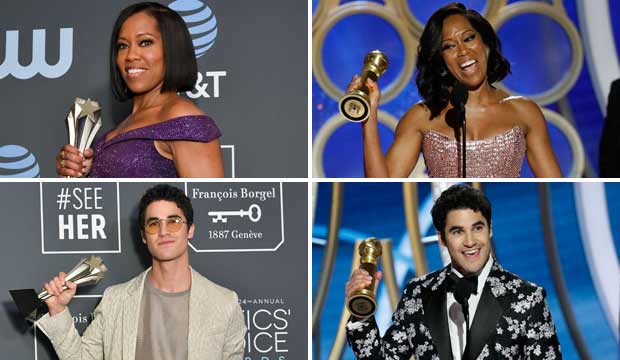 If you missed your chance to predict the most recent Emmys and Golden Globes, you had another opportunity on Sunday night because the 2019 Critics’ Choice Awards looked a lot like those recent kudos fests; the majority of their winners were the same. So why all the rubber-stamping? Did the critics wait for what their awards peers decided and then copy their homework? Check out the complete list of Critics’ Choice winners here.

For TV, there were 17 categories, and all of them corresponded to an Emmy and/or Globe race. But there were only three deviations. Critics’ Choice picked “BoJack Horseman” for Best Animated Series over Emmy winner “Rick and Morty,” which wasn’t nominated at this event. The critics also gave Best Drama Supporting Actor to Noah Emmerich (“The Americans”), who wasn’t even nominated at the Emmys or Golden Globes.

Amy Adams (“Sharp Objects”) claimed Best Movie/Limited Actress, but that only half counts because Critics’ Choice awarded her in a tie with Patricia Arquette (“Escape at Dannemora”), who was a repeat from the previous week’s Globes. All of the other 14 Critics’ Choice champs were a rerun of the Emmys, Globes or both:

For Best Original Screenplay the critics picked “First Reformed” over Globe winner “Green Book.” The Globes only have one screenplay category that combines original and adapted scripts, but wouldn’t you know it, Critics’ Choice gave its Best Adapted Screenplay prize to the only adapted script that made the Globes lineup, “If Beale Street Could Talk.”

Then there was Best Actress, which was another tie. Glenn Close (“The Wife”) won like she did at the Globes, but they also awarded Lady Gaga (“A Star is Born”), who most of us had been expecting to win the Globe.

The last deviation is more of a grey area. “Roma” claimed Best Picture instead of the two Globe winners for Best Film, “Green Book” (comedy/musical) and “Bohemian Rhapsody” (drama). But “Roma” wasn’t eligible for Best Film Drama at the Globes. It was restricted to Best Foreign Film — and won — so one could view that as another rubber stamp.

But the other 10 critics’ winners were in complete lockstep with the Globes:

The high rate of repeats raises an eyebrow because voting didn’t open for Critics’ Choice winners until after the Golden Globes. The same was true last year when there was a similar amount of rubber-stamping. And it’s especially curious when the critics rubber-stamp a Globe winner over a film or performer who actually had more critical acclaim.

That was the case for Bale, who won twice for “Vice” even though the reviews for that film were mixed. For Best Actor he beat the stars of films that had much more favorable critical consensuses: Bradley Cooper (“A Star is Born”), Willem Dafoe (“At Eternity’s Gate”), Ryan Gosling (“First Man”) and especially Ethan Hawke (“First Reformed”).

SEE2019 Critics’ Choice Awards: Will they preview the Oscars again?

But to give credit where credit is due, Critics’ Choice did go their own way in a few other notable contests. They gave Best Acting Ensemble to “The Favourite” even after it was snubbed from the corresponding category at the SAG Awards. They gave three craft awards to “Black Panther” (for its costumes, production design and visual effects) even after its drastic shortfall in most of those fields at the BAFTAs. And those screenplay choices are worth mentioning again: “First Reformed” and “Beale Street” were bold choices for a group that often prides itself on predicting the Oscars.

But even with those singular critics’ picks, Globe voters in the future may want to consider covering their test papers to make sure the student next to them doesn’t just copy their answers.