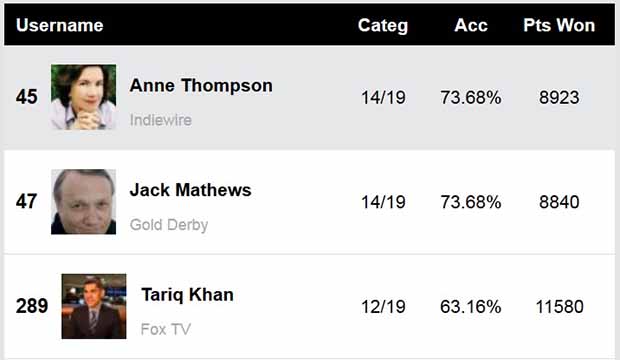 Congratulations to our Experts Jack Mathews (Gold Derby) and Anne Thompson (Indiewire) for a wonderful score of 73.68% when predicting the 2019 Critics’ Choice Awards film winners on Sunday. They are out front of 12 Experts, journalists who cover the entertainment industry throughout the year. See Experts’ scores.

Almost 1,800 people worldwide predicted these film winners for 19 categories chosen by the Broadcast Film Critics Association. The ceremony was live in Santa Monica and was hosted by Taye Diggs on CW.

Each of our top scorers had 14 of the 19 categories correct. For Thompson she had such tough picks as “Roma” for Best Picture and Christian Bale for Best Actor. Mathews had those as well plus Glenn Close for Best Actress and “First Reformed” as Best Original Screenplay for some of his hardest-figure-picks.

For the other 10 Experts predicting, Tariq Khan (Fox TV) and Susan King (Gold Derby) are next with 63.16%. Joyce Eng (Gold Derby), Tim Gray (Variety) and Tom O’Neil (Gold Derby) are then tied with 57.89%. Edward Douglas (Weekend Warrior) and Bonnie Fuller (Hollywood Life) are tied at 52.63%. We close out with a three-way tie at 47.37% between Peter Travers (Rolling Stone), Adnan Virk (ESPN) and Susan Wloszczyna (Gold Derby).