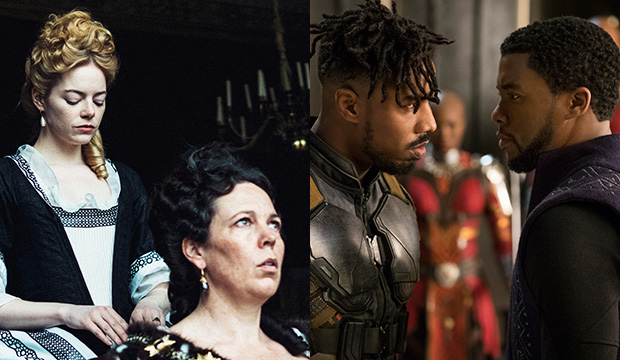 “The Favourite” missed out on an ensemble nomination at the Screen Actors Guild Awards, but it’s, uh, the favorite to win the same prize at Sunday’s Critics’ Choice Awards, per our predictions. However, it needs to watch out for “Black Panther.”

“The Favourite” has four Experts, four Editors and 17 Top 24 users picking it to win, compared to three Experts, three Editors and six users backing “Black Panther.” “Panther” has a lot of things going for it — it’s a cultural phenomenon and it boasts the largest cast of the nominees, with 13 eligible cast members. “The Favourite”‘s cast is the smallest of the five — with just five eligible cast members in Olivia Colman, Emma Stone, Rachel Weisz, Nicholas Hoult and Joe Alwyn — but the film arguably makes the best use of its players and their interactions.

If “The Favourite” pulls it out, it’d be the first film to win Best Ensemble at the Critics’ Choice Awards to not get a corresponding SAG Award nomination. Its SAG snub was surprising, given that its three stars, Colman, Stone and Weisz, reaped individual bids.

SEE No longer ‘The Favourite’? It’s the 6th film to get 3 individual SAG Awards nominations, but no ensemble bid

The SAG Awards also snubbed Critics’ Choice nominees “Vice” and “Widows,” which are in third and fifth place, respectively, so they’d make history too with a win. “Crazy Rich Asians,” the only other nominee besides “Panther” to be shortlisted at the SAG Awards, is in fourth place.