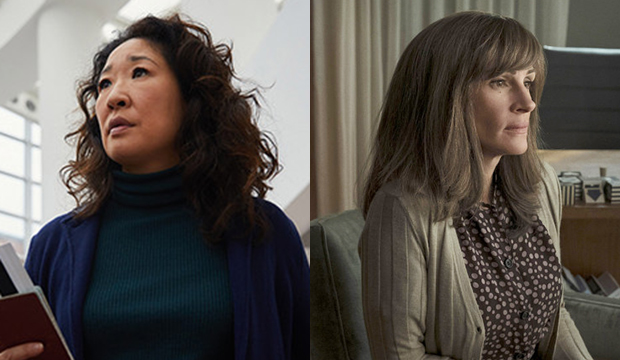 Seven leading ladies are nominated for Best Drama Actress at the 2019 Critics’ Choice Awards: Jodie Comer (“Killing Eve”), Maggie Gyllenhaal (“The Deuce”), Elisabeth Moss (“The Handmaid’s Tale”), Sandra Oh (“Killing Eve”), Elizabeth Olsen (“Sorry For Your Loss”), Julia Roberts (“Homecoming”) and Keri Russell (“The Americans”). According to Gold Derby’s racetrack odds, we’re about to see Round 2 of the exciting Oh vs. Roberts battle from last week’s Golden Globes, where Oh came out on top. Will Roberts now find revenge with the critics? The awards air Sunday, January 13 on the CW network in a ceremony that honors both film and TV.

One rogue Expert — Debbie Day (Rotten Tomatoes) — instead believes that Roberts will claim victory for playing Heidi Bergman, a social worker at a facility that helps soldiers transition back to civilian life. Roberts is of course an Oscar winner for “Erin Brockovich” (2000), so it’s probably not wise to completely count her out of the competition.

Next up are Gold Derby’s Top 24 Users, the two dozen folks who did the best predicting last year’s Critics’ Choice TV winners. These awards gurus are divided among five contenders, with 18 predicting Oh, one for Roberts, two for Russell, two for Moss and one for Comer.