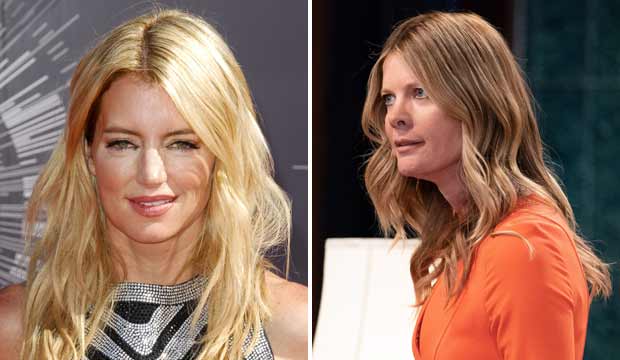 Soap fans were surprised when it was announced that Michelle Stafford would be leaving “General Hospital” to return to her role as Phyllis on “The Young and the Restless.” That meant the current Phyllis, Gina Tognoni, will be leaving. But what about that vacancy on “GH”? Stafford had played Nina Reeves on the ABC series for the last five years, and now “GH” has announced that it’s swapping one Emmy winner for another: Cynthia Watros is picking up where Stafford left off.

With only four soap operas left on the air, trading talent back and forth isn’t uncommon, but this has been a busy few weeks of actor switches, and this is another significant coup. Watros comes to “GH” with an impressive daytime resume of her own. She’s most famous for her role on “Guiding Light” as the villainous Annie Dutton, who she played from 1994 to 1998, winning the Daytime Emmy for Best Actress in 1998. That was her only nomination and win, but she later spent a few months from 2013-2014 as Kelly Andrews on “Y&R,” the show Stafford is now returning to.

Watros has also had a number of primetime TV credits including regular roles on “The Drew Carey Show” and “Lost,” and a recurring stint on “House.” For “Lost” she won a Screen Actors Guild Award in 2006 as a member of the ensemble cast. Will Nina bring her more kudos on “GH”? Though Stafford was an Emmy darling on “Y&R” with 10 nominations and 2 wins, she never made the cut at the Emmys as Nina. But who knows, maybe this time next year Stafford and Watros will both return to the Emmy lineup.

What do you think of this latest switch in the casting merry-go-round? Vote in our poll below to let us know.