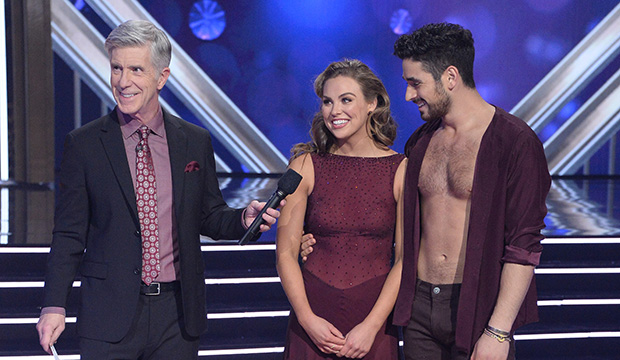 Alan Bersten is planning to go out with a bang on the “Dancing with the Stars” finale. The pro and Hannah Brown have two more dances to perform — the Viennese waltz and freestyle — and one is going to burn up the floor.

“I can say that I think we need to go out with an ‘explosion’ — it’s gonna be a ‘fire’ dance!” Bersten teased in his “Entertainment Tonight” blog.

Though he didn’t specify which dance this will be, it’s safe to say it’s their freestyle, which is literally the final dance for all the couples. Their redo dance, the Viennese waltz, doesn’t really lend itself to “fire” moments.

Bersten is in his second straight final and reiterated that he just wants to win for Brown. “She deserves to win the Mirrorball because I have never met someone who cares as much as me,” he said. “It has been so refreshing to see. Hannah is so passionate, she cares so much and she never gives up. I feel like I’m dancing with the female version of me! So, I just want Hannah to know that she is so incredible and I’m so proud of her!”

The couple, who is the only duo not to hit the bottom two this season,  is up against Lauren Alaina and Gleb Savchenko, Ally Brooke and Sasha Farber, and Kel Mitchell and Witney Carson. And Bersten was as surprised as anyone when James Van Der Beek landed in the bottom two. “I was shocked when James was even in the bottom,” he shared. It’s so sad to see anyone go home at this point, because everyone has worked so hard and we have all become such a close family. Everyone wants each other to succeed!”

Bersten, who called Brooke offering her spot to Van Der Beek an “impactful moment,” said his goal is for Brown to feel like a “girl boss” in their final week together. “I think the nerves are going to be through the roof, but in a good way!” he shared. “We get to do two dances that mean so much to us. It’s a little bittersweet, though, because this will be our last time on the ballroom floor.”