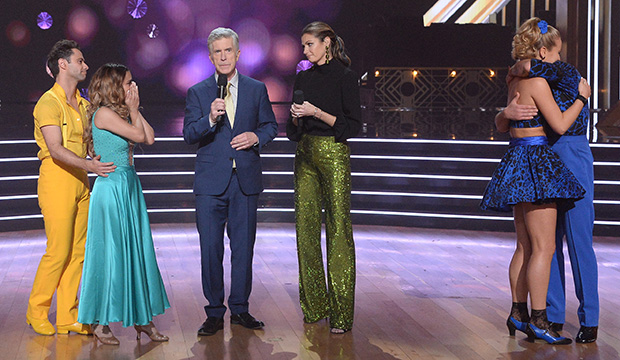 It’s not “Dancing with the Stars” if there’s no shocking elimination in the middle of the season. On Monday, the unfortunate victim was Sailor Brinkley-Cook, who got the boot despite receiving the highest score of the night, a 27, for her jive with Val Chmerkovskiy. Worse, she was in the bottom two with another top contender, last week’s top scorer Ally Brooke, while Sean Spicer avoided the bottom two yet again. The judges chose to save Brooke and her partner Sasha Farber for their consistency throughout the season, and the singer is still stunned that it all happened.

“It was completely shocking and I’m not putting myself above or anything like that — I just can’t believe Sailor was in the bottom two. And then she got eliminated. It’s completely and utterly shocking,” Brooke told “Entertainment Tonight” (watch below). “And I love that girl. She’s one of my closest friends on the show, so I’m just shocked. At the same time, I’m, of course, so thankful that we get to dance another week because this competition means the world to me.”

Brooke and Farber earned a 25 for their quickstep for a two-week total of 52. Brinkley-Cook and Chmerkovsky’s two scores came to 51. Four couples had two-week totals lower than that, including Spicer and Lindsay Arnold, who were way down at 40. But once again, the former White House press secretary made up for it in the votes.

SEE Sailor Brinkley-Cook was better than ever on ‘Dancing with the Stars,’ so how the hell was she eliminated? [WATCH]

Brinkley-Cook collapsed into tears on Chmerkovskiy’s shoulders once the judges opted to save Brooke over her. The model was so distraught that she didn’t do the press line after the show. “I’m sure she’s completely sad and I know she’s probably just taking her time to process this, so … I just can’t imagine how she’s feeling right now,” Brooke commiserated. “And we’re going to give her a huge afterwards.”

Farber is looking ahead and hopes their brush with elimination will be a wake-up call to viewers to vote for Brooke because no one is truly safe. “It’s happened before where there’s couples who were at the top of the leaderboard and they went home, so it proves you’ve got to vote for Ally, vote for your favorite, and anything can happen,” he said. “I think with something like this, hopefully this benefits Ally and people realize, ‘Oh, we need to vote for her,’ so hopefully fingers crossed, this will change.”