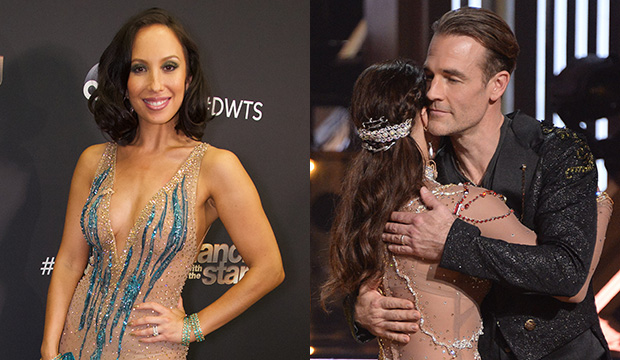 Just like everyone and their mother, Cheryl Burke also can’t believe that the “Dancing with the Stars” judges eliminated James Van Der Beek one week shy of the final.

“It must be really hard for the judges to be put in that position. At the end of the day, if I were to take out everything and see this as a dance competition, maybe it wasn’t his best,” Burke wrote in her “Us Weekly” blog. “But I think giving James the scores that they did and then all three of them saying that they would’ve saved Ally Brooke … It just was so harsh.”

The “Dawson’s Creek” alum shared during the show that his wife Kimberly had suffered a miscarriage on Saturday (Burke reveals that Van Der Beek missed camera blocking on Sunday and Keo Motsepe stepped in to dance with Emma Slater) and that he wasn’t going to perform on Monday until Kimberly urged him to. He was understandably off in his routines and the judges handed him the lowest combined score of the night, marking his first time at the bottom of the leaderboard and then his first time in the bottom two.

Burke said that even her husband Matthew Lawrence was distraught over the surprising turn of events, crying over Van Der Beek’s elimination. “I’m like, ‘Are you crying?!’ He’s like, ‘This is just horrible. This is supposed to be a feel-good show.’ But it’s reality! It is a reality show, it is a variety show,” Burke said. “At the end of the day, it’s a human thing that happens and it happened during the show where people are tired but you see the light at the end of the tunnel.”

The two-time champ was emotional herself when Brooke volunteered to forfeit her finale spot to Van Der Beek. “That’s who Ally is. She’s always positive. She’s so supportive and she’s not selfish at all. She’s genuinely a great person,” Burke gushed. While couples have talked about giving up their spots before, Burke doesn’t know if anyone would actually do it. “You’re giving up everything but at the same time, this show is bigger than you,” she pointed out. “It is what it is. At the end of the day, someone does have to go home, but I do wish that James was still around.”

Still, that doesn’t mean Burke thinks Brooke should’ve been axed; the singer is her pick to win it all because she’s been “consistently at the top of the leader board, whether people like it or not. I think she’s the best dancer.” But she’s also well aware that fans aren’t voting for Brooke, who survived her third trip to the bottom two. Brooke’s magnanimous gesture, however, might turn the tide for her. “I do think that one second that she said [to Van Der Beek], ‘Please take this. Take it from me,’ I think that might change the vote to her benefit because it was genuine,” Burke predicts.

And if it’s not Brooke, Burke is putting her money on Kel Mitchell, who’s been the most improved. “People view the show differently,” she noted. “Is it about somebody who was not as great in the beginning who becomes a great dancer, or is it someone who has continuously and consistently has been at the top? Either one, I’d be happy!”