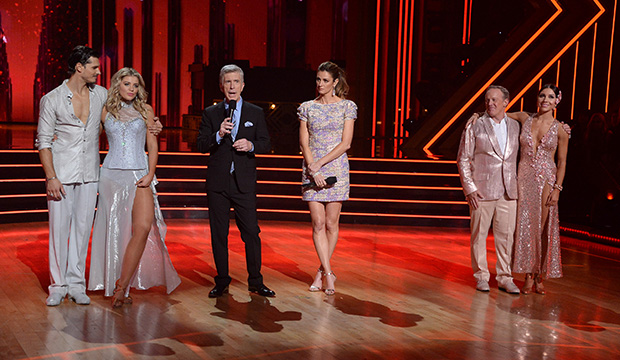 Cheryl Burke‘s prediction that Sean Spicer would make the “Dancing with the Stars” final did not come true, but that doesn’t mean she was surprised by his elimination either.

“At the end of the day, he was the weakest link, as far as dance competition goes,” Burke wrote in her “Us Weekly” blog. Selfishly for Lindsay Arnold, I was hoping they could do a last dance but with what happened with Lindsay, my heart goes out to her.”

Burke gave props to Jenna Johnson for filling in for Arnold the past two weeks after the death of her mother-in-law. “There are so many emotions because he was walking out with a different partner than when he started but he handled himself with class and with grace and I think Jenna Johnson did such a great job with him, especially being thrown into it,” she said.

But with Spicer gone, Burke declared that “now the competition is for real.” The two-time champ didn’t share who she thinks could win, but revealed what she told Ally Brooke: It’ll all come down to the freestyle.

“I said this to Ally: ‘It’s such a shame that you work so hard on all of these dances but then, really, at the end of the day, the freestyle only matters.’ You can throw everything out the window. No one cares, no one remembers, but they want the freestyle to be something that they think about and that would be the most memorable,” Burke said. “But after 28 seasons of seeing all the freestyles, it’s going to be really hard to outdo some of these past freestyles that you’ve seen all the way back from Season 1. There’s nothing new now. How can you reinvent something that’s been done? So it’s really about reinventing the wheel and making it entertaining, making it clean enough and making it so that the judges appreciate it.”

Brooke has been in the bottom two twice now despite great scores, including a perfect 30 in Week 8; however, she escaped it with two perfect scores in the quarterfinals. But Burke cautions everyone not to rest on their laurels because of the new voting structure.

“Who knows who’s voting, who knows how many votes, because it’s so different now,” she noted. “The West Coast can barely even watch the show before they can vote so for the West Coast, is it a popularity contest? How does that work? We just don’t know. At the end of the day, you want to stay out of that bottom two, but all you can do is make sure you go out there and at least get the judges’ approval.”