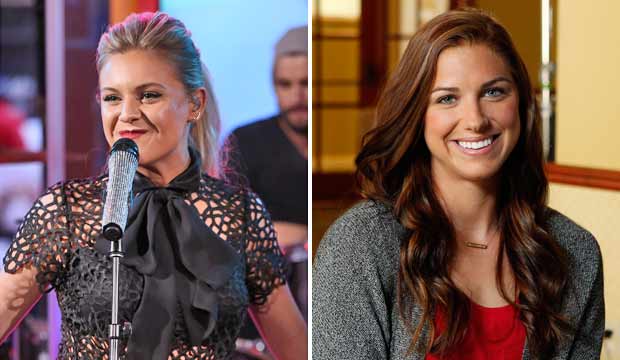 The new “Dancing with the Stars” cast will be announced on “Good Morning America” next Wednesday, August 21, but before we find out which celebs will be competing for the Mirror Ball Trophy in season 28, here are six female celebs I’d love to see in contention. Vote in our poll at the bottom of this post to let us know which of these stars (if any) you hope are announced as competitors next week. And check out my wish list of male celebs here.

Palmer began her career as a child star in film and television shows such as “Akeelah and the Bee,” “True Jackson V.P.” and “Jump In.” She has been able to make the leap to grownup roles, including the upcoming heist film “Hustlers.” In addition, she has recorded an album, starred as Cinderella on Broadway, and even had her own BET talk show. This summer she stepped in to co-host “Strahan and Sara” during Sara Haines‘s maternity leave, so a “DWTS” gig would generate some extra cross-promotional buzz since they both air on ABC. And the show has been a good fit in the past for music stars (Nicole Scherzinger), Broadway alums (Alfonso Ribeiro, Jordan Fisher) and former child stars (Frankie Muniz), so she might be an especially good fit.

She may be known to many as the wife of NBA champion Stephen Curry, but Ayesha has been able to carve out a career of her own. Since entering the spotlight she has built her own culinary and lifestyle brand and hosted ABC’s “Family Food Night” (more network synergy!). She has also been vocal about the challenges of being a basketball wife, like trying to be the perfect spouse and mother while her husband is in such high demand, which gives her a strong rooting factor. Could she make the finals like other TV presenters Erin Andrews and winner Brooke Burke?

SEEMark your calendars: Here’s the date the ‘Dancing with the Stars’ Season 28 cast will be announced

Morgan is best known as a member of the U.S. women’s soccer team, which had everyone on the edge of their seats this summer as they dominated the competition to win the FIFA World Cup. “DWTS” loves to cast athletes following championship performances (for instance, Olympic gymnastics gold medalist Laurie Hernandez and World Series champ David Ross). As one of the more popular athletes from the team, Morgan would bring in a huge fan base regardless of how she performs on the dance floor. Also, it’s about time the show cast another champion U.S. soccer player. It’s been eight years since Hope Solo reached the semifinals.

Veteran TV host O’Dell has been a fixture on the entertainment news circuit for over 30 years, and she recently announced that she was stepping down as anchor of “Entertainment Tonight” to spend more time with family and pursue other ventures. O’Dell was actually supposed to appear in season eight of “DWTS” but had to withdraw prior to the show premiering due to injury. The producers should give her a second chance.

SEEWatch Tom Bergeron, sad puppy dog eyes and all, try to recruit William Shatner for ‘Dancing with the Stars’

Ballerini is an ACM-winning and Grammy-nominated country artist known for her hits “Peter Pan,” “Love Me Like You Mean It” and “Legends.” Several country artists before her have appeared on “DWTS,” such as Billy Ray Cyrus, Sara Evans, Jana Kramer, Wynona Judd and Kellie Pickler, with Pickler taking home the Mirror Ball Trophy back in season 16. It also helps that Ballerini is pals with reigning “DWTS” champ Bobby Bones, with whom she hosted this year’s “CMA Music Festival: Country’s Night to Rock” alongside fellow recording artist Thomas Rhett. So goodness knows she’d be able to get out the vote.

As half of one the most successful power couples in Hollywood (she is of course married to Will Smith), Jada reinvented herself for the social media era as producer and host of “Red Table Talk” on Facebook Watch, where she has discussed topics including forgiveness, abuse,  marriage and addiction along with her daughter Willow and mother Adrienne. I think casting Jada would be a huge get and a great opportunity for her to introduce dance as another form of expression to her millions of followers.