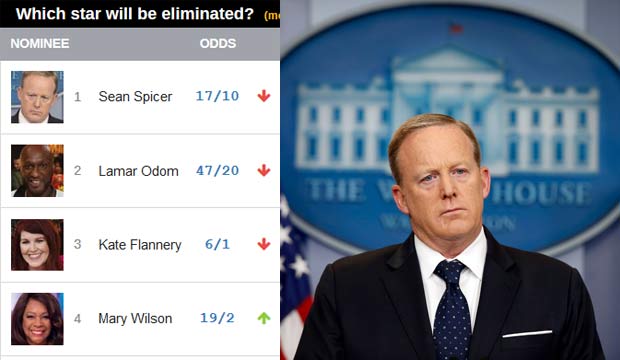 Basketball player Lamar Odom got the lowest score from the judges in the season premiere of “Dancing with the Stars,” but he may not be the one eliminated tonight. According to the combined predictions of “DWTS” fans who have given us their forecasts here in our predictions center, Sean Spicer will be the first to get the boot. However, it also depends on tonight’s dances and how the voting process will be handled.

As of this writing Spicer gets leading odds of 17/10 of getting the axe, followed by Odom with 47/20 odds, “The Office” actress Kate Flannery with 6/1 odds and legendary singer Mary Wilson with 19/2 odds. Indeed, Spicer and Odom landed on the bottom of the judges’ leaderboard: Odom with 11 out of 30 and Spicer with 12 out of 30. But last week’s scores are going to be combined with tonight’s scores as well as tonight’s live audience votes to determine the elimination.

And there’s more. ABC promised that “a big format change in voting will change everything,” but it won’t be revealed until tonight’s show, so we’re still flying a little bit blind trying to figure out how it will affect the ultimate outcome. But I’ll be honest: whatever the change is, I hope it does knock Spicey out of the competition.

Celebs doing image rehab on “DWTS” is nothing new for the show (consider controversial stars like Paula Deen, Ryan Lochte and Tonya Harding). But Spicer, in particular, trying to launder his legacy of helping deteriorate American democracy by putting on silly outfits is especially egregious. Even Tom Bergeron didn’t want him on the show. But there’s a conservative contingent of “DWTS” fans that often boosts conservative-associated contestants like past finalists Bristol Palin (season 11) and Sadie Robertson (season 19). So I’m worried we’ll be stuck with him for at least a little while, depending on tonight’s twist.

What do you think? Are our odds right that Spicer will be the first to go, or will our national nightmare continue for at least another week?