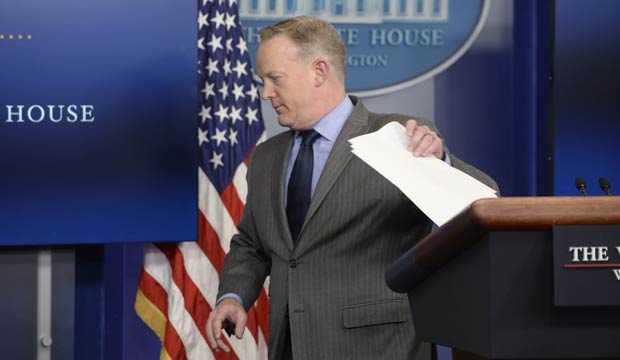 Sean Spicer has been one of the lowest scoring celebrities this season on “Dancing with the Stars,” but he’s still on the show in large part because he hasn’t landed in the bottom two yet. Up to this point he has always escaped, undoubtedly thanks to the votes of viewers at home since he has typically been near the bottom of the judges’ leaderboard. But with Mary Wilson, Ray Lewis and Lamar Odom gone, there may no longer be any buffer zone between him and the bottom of the pack. So there may be nowhere left to hide — except maybe in the bushes again.

As of this writing our racetrack odds say Spicer will be eliminated. He gets 13/8 odds of getting the boot based on the combined predictions of “DWTS” fans who have given us their forecasts here in our predictions center. Tonight on “Disney Night” he tackles a quickstep with his pro partner Lindsay Arnold. It’s a dance style so difficult they rarely even give it to the highly trained contestants on “So You Think You Can Dance,” so the already struggling Spicer might have an even harder time in this dance style.

But there’s a chance “Queer Eye” star Karamo Brown will be eliminated instead: he ranks second in our predictions with 12/5 odds after landing in the bottom two last week. But Brown has shown signs of improvement, so if he lands in the bottom two with Spicer chances are good the judges will send Spicer home instead. The White House propagandist‘s best hope will be avoiding the bottom two again altogether. Or he could try to convince the judges that he actually had the biggest vote totals in “DWTS” history, or that millions of undocumented viewers voted illegally for his opponents.

Actually, his best chance might be that no one is eliminated tonight thanks to Disney magic. “DWTS” didn’t send anyone home on “Disney Night” last year, so wishing upon a star might actually be the key to staying in the competition for a while longer.